“Desperation can make a person do surprising things.” ― Veronica Roth 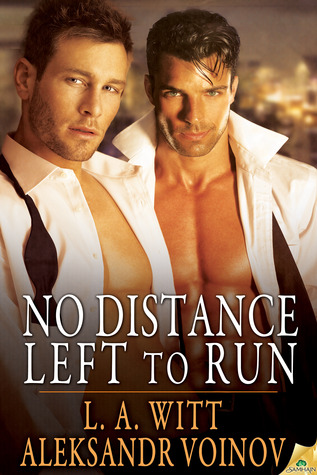 No Distance Left to Run

Title: No Distance Left to Run (Distance Between Us: Book Four)

Blurb: The night before Chris and his best friend Joshua were sent thousands of miles apart on their respective Mormon missions, they finally gave in to their mutual desire. Left trying to make sense of what happened, Chris’s already shaky faith crumbled altogether a year later when Joshua suddenly died.

Inconsolable, ostracized by his family and the only community he’d ever known, Chris found his way on his own. Now he’s going to school and loves his job as a bartender at Wilde’s. Years after Joshua’s death, he’s finally moving on.

Then a familiar face rocks his world. Joshua isn’t dead. He’s back in Seattle to make peace with his dying father, with a new name, a new accent…and old feelings for Chris that are alive and well.

Forgiveness doesn’t come easy for anyone, but just as Chris is accepting that the man he loves isn’t going to run away this time, their families threaten to pull them apart all over again…

Review: I’m one that if I’m familiar with an author, or authors, I tend to start reading their books without really looking at the blurb. I like going into a story knowing very little about it. Needless to say, I kind of wish that I had read the blurb for this one. I would have been better prepared for a topic about which I’m a little touchy: religion.

Chris finds out that Joshua is still alive while having lunch with Joshua’s sister, Deb, and that the two have been in contact with each other for about a year, through Facebook. That Joshua is coming back to make peace with his dying father, and, by the way, that Joshua is flying in this evening, and “would you like to come with me to see him?” Stunned, Chris has his moment of accepting that someone he thought dead is, in fact, alive and well. After all, his whole life changed when he thought his best friend had died, going so far as to leave his religion behind. When these two men meet again at the airport, there are some awkward moments. Chris invites Joshua (aka Julian) to come stay with him, while Joshua explains why he left to join the Foreign Legion. And since they’re both self proclaimed sluts, it doesn’t take very long for Joshua and Chris to fall into bed with each other.

Okay…about this time I have this weird, skeptical look on my face, and I’m asking myself, what the heck have I gotten myself into with this one? I guess I expected a little bit more resistance from Chris since he was so hurt by what Julian (aka Joshua) had done when he just disappeared. But, ever the faithful friend, it just got swept under the rug in the name of friendship and lust.

Now, we come to Julian/Joshua’s family. I also would have left these people and all their religious expectations behind! Like I mentioned earlier, I’m a little touchy when it comes to religion. There were moments when I became a bit irritated by the parents of both these young men, but the one thing about this story is that it did have a couple of good points to make about unconditional love and acceptance, even though it felt that certain topics were rushed through and left up in the air.

So, with that in mind, I’m giving No Distance Left to Run a 3.5 star rating.

You can buy No Distance Left To Run (Distance Between Us: Book Four) here:

No Distance Left to Run