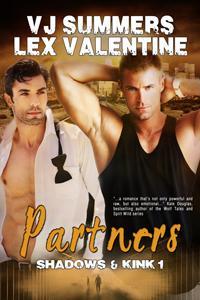 Blurb: TDA agents Travis Wilder and Ian Hawke are fuck ups. As members of a covert organization that battles terrorism in a world that’s lost its political, economic and social infrastructure, their job is to find and neutralize dangerous terrorists. But neither Travis nor Ian have been able to complete a mission successfully in recent months. Travis kills his targets while Ian beds his. In an effort to save his two best agents, their handler makes them partners.

Ian, with his upper-crust British accent and flirty behavior is everything that attracts Travis and repels him at the same time. For Ian, the taciturn, domineering former Force Recon officer represents a temptation he knows better than to succumb to. But working and living together builds a unique bond between the two. As sexual tension spirals higher between them, as their secrets and kinks are revealed, their need for each other becomes undeniable. They’re two broken men forced into a partnership neither of them wants…a partnership guaranteed to be their salvation or their destruction.

Review: I am so totally in love with this book and these two MCs. Travis Wilder is former Force Recon and a soldier at heart. He definitely has a shoot first and ask questions later attitude. Having been burned in the past by someone of wealth, Travis has a true and complete hatred of anyone from a wealthy background. After being injured in the military and having to retire, Travis ends up working for TDA tracking down and bringing in terrorists. The unfortunate part is he keeps killing his targets instead of bringing them in for interrogation.

Ian Hawke grew up in a very affluent world. When the world changed horribly during his youth, Ian was forced to change his habits, and he was taken advantage of and lost everything he held dear. After all of these changes, Ian decided to use his looks to his advantage, and he became an agent for TDA. He was one of the best agents when seduction was the name of the game, but he ended up overusing his talents, and his boss is at the end of his rope.

Both Ian and Travis are given an ultimatum: either find a way to work together to fix their issues or end up riding a desk. Since neither one of these men could survive that, they put their best foot forward and do their very best. Travis hates just about everything about Ian and his background, while Ian is scared to have anyone close to him again.

They are both fighting a losing battle with their shared attraction, however, and eventually they do give in to their desires. Just as was meant to happen, they became stronger as a team, but Travis’s overbearing nature, while hot as hell, could be too much for Ian when they are field tested for the first time.

When they identify the leader of a terrorist organization, they realize there is something more going on and possibly the biggest thing to happen since the huge terrorist attacks that changed their lives forever so many years ago. These two men could be the last best hope for a free America.

I cannot tell you how much I loved this book. This was a very strong start to what is a very promising and inventive series. This book has set a strong foundation for the future books to come and gave me plenty of background information on both MCs and the people around them. I was quickly drawn into the story, and it just seemed to flow until I was surprised that it was over. I haven’t read a lot of dystopian stories, but this one ranks at the top of my list. It is definitely an opposites attract story, and I can’t wait to see what is in store for them next. I highly recommend this book.