“Love never dies. It fizzles out maybe but it stays there in your heart buried by emotions controlling you. Once the fire is rekindled, love resurfaces again, breathes a new life.” – Elizabeth E. Castillo 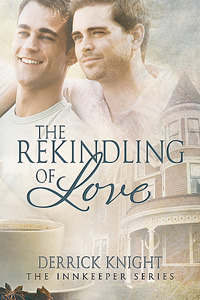 The Rekindling of Love (The Innkeepers Series)

Title: The Rekindling of Love

Blurb: Dwyer Von Strohm thought his life was perfect. He had a great job as a pharmaceutical sales representative; he lived in Chicago’s premiere gay community, drove an expensive car, and had an unlimited number of hot gay men to pursue. Dwyer thought his was living the life he had always dreamed. Then one day he becomes a causality of a poor economy. In a very short time, Dwyer loses his job, loses his status in the gay community and is reduced to living a lonely existence.

Dwyer’s situation forces him to move back home and live with his parents in the small town of Glasburg Illinois. Dwyer had left Glasburg many years ago because the love of his life, John Fitzgerald, had broken his heart. Dwyer reunites with gay friends from high school who are facing their own life challenges.

Soon Dwyer and John’s paths collide and it is evident both men still have strong feelings for each other. Will Dwyer find it in his heart to forgive John or will he let the demons from their past prevent them from rekindling the love they once shared?

Review: The Rekindling of Love is the first in what appears to be a series of books called The Innkeeper Series. This is the first book I have read by Mr. Knight. I have to be honest and say that I struggled with it quite a bit.

We have our main characters, Dwyer Von Strom and John Fitzgerald, from the small town of Glasburg, Illinois. The two were secret high school sweethearts who broke up after Prom because of an evil girl, and have lived far apart and avoided each other for over a decade. Each thought the other hated him. It seems to be turning into a thing, lately, to make the reason our heroes are apart because of the actions of a girl or woman. I hope the trend is short lived.

Dwyer has come into a financial downturn, which forces him to move back to Glasburg from Chicago to live with his parents. John has been living in Glasburg for a while, taking care of his aging parents who are in poor health. So far, I think this is a good outline for the beginning of a great book. I love second-chance-at-love stories.

In my opinion, as a non-author, Mr. Knight just put too much in this book. There were at least a dozen secondary characters, some of them were couples, and Mr. Knight provided the reader with flashbacks to earlier parts of their relationships. I understand that there is a desire to write future books in the series for these men, and I think the flashbacks would have better served the reader if included in those books. These couples could have just been introduced in The Rekindling of Love only to the extent that their presence impacted John and Dwyer.

The writing style felt very clunky. It seemed to be very formally written. Rarely were contractions used that I noticed. Sometimes facts would be restated when a new character entered a scene, even though the reader was privy to the prior conversation and didn’t need to have the information repeated. I think a couple of rounds of editing would probably have made this an excellent book and cut out approximately 75 pages.

The main characters created by Mr. Knight were very likeable, and I was rooting for them. Even the cast of secondary characters was quite likeable. When they get their own stories, I will probably be rooting for them as well. With the characters already established, and a promising storyline like the one seen here in The Rekindling of Love, I have every hope that Mr. Knight relaxes his style a bit and writes a much more readable sequel.

You can buy The Rekindling of Love here:

The Rekindling of Love (The Innkeepers Series)