“Love is hard to find, hard to keep, and hard to forget.” ― Alysha Speer 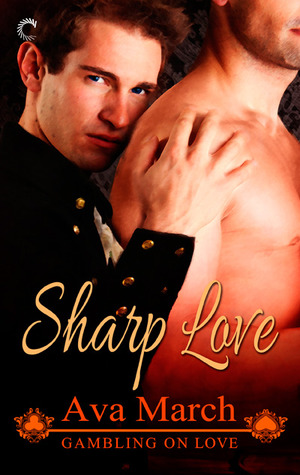 William Drake has lived among thieves, bastards and beggars all his life, doing what’s necessary to survive. As a young orphan, that included looking after his best friend, Jack Morgan. But as they grew older, Jack took the honest path, leaving Will behind to fend for himself the only ways he knows how.

When an unsavory errand for his employer brings Jack back to London’s underbelly, he needs Will’s help. It’s there, among the alleys they ran through as children, that the love he’s always felt for Will returns. As their nights together grow hotter, Will discovers something new about his old friend–Jack’s need to serve extends into the bedchamber.

Will has never fully abandoned his dream of escaping London with Jack. But what could the Duke’s driver want with a dishonest cheat like him, beyond a bit of rough sex? It takes the gamble of Will’s life to find out if he can win Jack’s heart…

In a bit of a departure, Sharp Love bypasses the romance between a peer and a lower-born lover and presents the story of William Drake and Jack Morgan, one orphaned, the other abandoned by his father when they were both mere boys, who’ve been the best of friends—through the worst of times—for two decades. That friendship, however, has been tested over the course of the past ten years by Jack’s desire to become more than what his circumstances have dictated he should, or even could, be.

Taking on a proper job that eventually led to his being hired to work in the Duke of Pelham’s stables, Jack has escaped a life on the streets, but even more than wanting a better life for himself, he needed to escape the life that Will was living, a life that served to cause Jack no end of torment and worry. Will gambles his nights away, both at the card table and in back alleys when in need of a little extra coin to add to his coffer of dreams. It was this chosen life, one Will lives unapologetically, that made the risk of staying with Will too much of a gamble for Jack.

Ava March mines every nugget of emotion from this story, all while making the reader fall in love with both Jack and Will. Their friendship is tenuous at best, as Jack faults Will for his choices, and Will succumbs to his belief that he’s not good enough for Jack. Jack purposely avoiding Will while still using him to suit his needs and fulfill his duties to the Duke of Pelham causes no end to the friction between the two men as they slowly navigate their way from friends to lovers.

Of all the author’s work I’ve read to date, which I think is everything she’s ever published in the genre, I have to say I feel this novel ranks among the best of her work. While not excessively intricate, the plot is tightly woven and the narrative is paced perfectly. The chemistry between these two men is sublime and is made all the more believable because of their similar stations in life and their shared past. The sexual tension that mounts between Will and Jack until it is ultimately fulfilled—and by no means, easily—adds to the collective emotional investment for the reader.

Although Sharp Love is listed as book two in the Gambling on Love series, I believe it reads very well as a standalone even though Jack Morgan, faithful coachman to the Duke of Pelham, is introduced in book one. And with all due respect to the Duke of Pelham and his beloved Mr. Walsh, our heroes in All in with the Duke, I have to say I loved Jack and Will’s story just a wee bit better, which is truly saying something because I loved His Grace and Tristan Walsh quite a lot.

Fans of Ava March should be excited about this latest addition to her collection. Fans of historical romance with just a soupçon of D/s thrown in to heat things up between two strong willed and sexy men, might want to consider adding this one to your TBR piles as soon as it’s available.

You can buy Sharp Love (Gambling on Love #2) here: