The Novel Approach welcomes Elizabeth Noble on her Run for the Roses blog tour. She’s answered a few questions for us, and is also offering one lucky reader the chance to win an e-copy of the book via a Rafflecopter contest.

Read on, and enter to win!

TNA: Elizabeth, I love this trend we’re seeing of the “mature” protagonist/love interest in M/M romance. What are some of the things you like about writing a man who’s got a few years’ experience behind him?

Elizabeth: I didn’t set out to write that sort of romance, but the plot called for someone with experience, as well as being a father with an adult child. I have to say I liked writing this sort of character and couple very much and liking the whole set up myself. I’ve always enjoyed stories where the characters have some age difference, but this is the first one I’ve done with more than a ten year difference.

I think what I like the best is the experience part. A more mature person is going to be more level headed and come at a romantic situation differently. They have learned a tiff or argument doesn’t end a relationship and the real and true happy ending is spending years together, weathering the ups and downs. In general they don’t get as fussed up over things like someone who is younger might.

TNA: Is it tricky writing a romance between an older and younger man? Do you find you have to work a little harder to find just the right spark to make them a believable couple?

Elizabeth: The biggest trick for me was finding things for them to have in common. Val and Wyatt didn’t have that shared time period growing up to fall back on and reference when they talked and as they got to know one another. Wyatt is the older of the two and he’s traveled, made farther advances in his career and those types of things affected how each would think they were viewed by the other. It was getting them beyond their differences that was the most challenging and I think most satisfying part of their relationship.

They each brought different things and both are old enough to have ‘baggage’. Val is more insecure and like a lot of men his age judges himself on how he compares to others in terms of job, clothes, and life experiences. Wyatt has gotten to the age where he is beyond all that and has the type of security in himself that only comes after the age of forty. He’s learned, in the way one only can by living through various events, that life goes on and there is always a new opportunity ahead.

Combining those traits into one relationship without making it sound forced or overly syrupy was a challenge to making them a believable couple.

TNA: What makes Val and Wyatt work as a couple? Do you feel it’s their similarities that make them click, or is it their differences that complement each other? Or, is it a combination of both?

Elizabeth: Val and Wyatt work as couple because firstly they like one another. Val of course thinks he’s too young and not refined enough to interest a guy like Wyatt, who he’s always considered the type of man out of his league. Their relationship really takes off and grows when Val realizes there is plenty about him to keep Wyatt’s interest. The way they find common ground and use their differences to bring them together is for me what really makes them work together.

Like any relationship each person has to be willing to take a chance on the other person. Anyone, no matter the ages of the couple, has differences and similarities, learning about them is one of the great things that comes with a relationship. Fantastic sex doesn’t hurt either. I think Val is pleasantly surprised and turned on by Wyatt’s approach to sex, which is again different from a guy in his early thirties. Val loves that in fact. 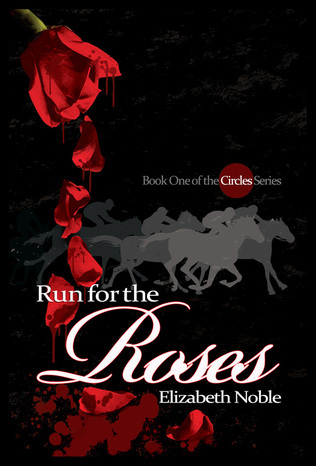 Blurb: Wanting to end his pattern of choosing controlling and abusive men, Vladimir ‘Val’ Mihalic figures it’s better to live alone than live in fear. Just when things are settling down—his biggest trouble recently is a Kentucky Derby hopeful that won’t load into a starting gate—his best friend Janelle’s violent ex-boyfriend kidnaps her. After she’s seriously injured in a car wreck, Wyatt Harig, Janelle’s estranged father, comes around to tend to his daughter. Despite Val’s determination to avoid relationships, Wyatt interests him in ways that make his resolve waver. As complications and repercussions pile on in the aftermath of Janelle’s kidnapping—including a gambling charge and a murder—Wyatt and Val must work together to seek answers. And the closer they get to each other, the more Val wants them to stay that way.

Author Bio: Elizabeth Noble started telling stories before she actually knew how to write, and her family was very happy when she learned to put words on a page. Those words turned into fan fiction that turned into a genuine love of M/M romance fiction. Being able to share her works with Dreamspinner is really a dream come true. She has a real love for all things sci-fi, futuristic, and supernatural and a bit of an unnatural interest in a super-volcano in Wyoming.

Elizabeth has three grown children and is now happily owned by an adorable mixed breed canine princess named Rosie, and two cats, Murphy and Yeti. She lives in her native northeast Ohio, the perfect place for gardening, winter and summer sports (go Tribe!). When she’s not writing she’s working as a veterinary nurse, so don’t be surprised to see her men with a pet or three who are a very big part of their lives.

Watch for the Remaining Tour Stops:

10 thoughts on “Blog Tour and Giveaway: Elizabeth Noble’s “Run for the Roses””