“One can begin so many things with a new person! Even begin to be a better man.” ― George Eliot 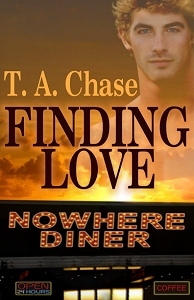 Blurb: Leaving Minnesota, Timothy Gapin doesn’t have any plans except getting as far away from all the memories as he can before his money runs out. His secret lover has married, breaking his heart and making him chose a life in the open rather than a relationship built on lies.

Little does Tim know that four days later he would grab dinner at a diner and find a place to stop. Somehow this diner in the middle of nowhere becomes his home and the people who work there his family. In addition to the workers at the diner, Tim meets Bernie Capley, a long-haul trucker who isn’t all he seems to be.

Falling in love with Bernie is easy for Tim, but the past has a way of barging into the present, forcing decisions that affect their future…

Review: I have been a fairly avid fan of T.A. Chase since I first discovered the M/M genre. I had read this book previously, but with the release of the sequel coming I decided to do a reread and a review for the blog. I hope y’all enjoy this as much as I did.

This story begins with a heartbreaking farewell scene at the local bus station in the small Minnesota town that Timothy Gapin has lived in his entire life. Tim never truly wanted to leave home, but after years of hiding in his lover’s closet, Tim reached his limit when he found out that the man was getting married. He knew there was no way he could stay in town and watch the man he loves be married to someone else, so he hops a bus and rides toward a new beginning.

During a stop, Tim is in a small diner and before he knows it, he has found himself a job and a place to live for a while; just until he can decide what he wants to do with himself long term. Tim finds himself a new group of friends at the small diner, and he begins to settle in with Chad, Cookie and all the other hilarious characters we meet there.

When he spots Bernie, a long haul trucker, he is almost instantly smitten. He isn’t sure which way Bernie leans, so he decides to just appreciate the view from afar until he finds out for sure. When he accidentally tips his hand, he is happily surprised to find out that Bernie had been noticing him also.

Tim and Bernie begin to date, and they quickly start to fall for one another. When Tim’s uncle falls sick, Tim realizes he has to head back to Minnesota, and Bernie is right by his side the whole way. While they are in Tim’s hometown, there are some heavy confessions made and some fairly tough confrontations.

Tim and Bernie survive the trip to Minnesota and when they return to their little diner in Texas, their relationship faces a few bumps in the road but nothing they can’t handle.

I truly enjoyed reading this story about a small diner in Texas that seems to draw all the misfits and wanderers alike. Even with all of the happenings around the men, their love story managed to remain the main focus of the book. By the time it was over, I was fully invested in the characters and so very ready for the sequel. I would highly recommend this story, and keep an eye out for the sequel as well.

You can buy Finding Love (Nowhere Diner: Book One) here:

One thought on “A Man Finds A Place To Call Home In T.A. Chase’s “Finding Love””