Hi, readers, and thanks Lisa and the Novel Approach team for having me on the blog today!

My name is Daisy Harris, and I pants.

When I offered to write this post, I was knee-deep in the delusion that I would have something helpful to say to all you other pantsers out there—some words of wisdom about how with the right tools and the right motivation and just a little bit of planning, all us pansters could find a way to plot and have it work. We’d write dozens of books. Nay, hundreds! All seamlessly from start to finish with my new, fancy plotting scheme that I would share with you all!

The world of writing is full of reformed pantsers who claimed to have found Jesus and now know how to come up with an outline and stick to it. Or at least come up with plot points and aim for them. Or something. They’ve learned a magical way not to write blindly into the void.

Bravo for them. But me? Yeah, that doesn’t work.

When I start writing a book, I have no idea in the world how it’s going to end. None. Zilch. Zippo. It’s only by writing that I manage to figure out what happens. Frankly, I’m not sure I’d want to write a book where I knew the ending before I started. Bo-ring!

I’ve written twenty-eight books so far, and I’m here to tell you: If I could plot, I would have learned how to do it by now.

As a result of my problematic pantsing, I rewrite the ever-loving poo out of every book I write. Maybe it’s different for other people, but for me pansting means that I need to rewrite practically every word at least once. Possibly three or four times. Still, the books I pants the most fully turn out to be my favorites.

Case in point—College Boys. When I set out to write that one, I had no idea if I could even do a contemporary. So I wrote it on a lark, and it turned into one of my favorite books I’ve written. Ditto, My Fair Dork. That was another I didn’t even sketch an outline for. I winged it. And I think it turned out pretty well.

As for my book that just released today—Nothing But Smoke—I tried to plot. I really did! But I wrote an entire first act of the story with a whole different character before realizing I was going to wrong direction. I wrote parts of it months before I tackled the rest. Whole subplots got cut. I tried out three different black moments once I had the plot resolution nailed. It was a fucking re-write disaster.

Yet I love Nothing But Smoke more than anything else I’ve written to date. People say you need to know where you’re heading in order to write? Well, I call malarkey. A central question in Nothing But Smoke was whether my main character Nicky would tell his ailing mother that he was gay, and I had no idea what he was going to choose until I’d written through to the end of the book.

Of course, once I realized what Nicky had chosen, I had to go back and rewrite the story so it led cleanly to the resolution. But anyone who says you can’t write into the nothingness is lying. You can.

It might not be convenient, streamlined, or pretty, but there are an infinite number of ways to write a book. My advice is to find your own way and not worry about what everyone around you is doing.

If pantsing works for you, I say “Stick with it!” I’ll be right behind you, working on my fifth rewrite and knowing that I wouldn’t want to be doing it any other way.

Cheers and see you all at GRL in the fall! In the meantime, if you want to check out my new release, Nothing But Smoke, pick it up on Amazon, Samhain, or wherever else MM romance is sold!

Michael Larson considers himself one of the good guys. He recycles, eats mostly vegan, and volunteers. But one night, while on a jog through a Seattle park, he encounters a sexy man on a motorcycle he wants to be bad with.

Firefighter Nicky O’Brian barely has time to even think about a sex life. Between his job and caring for his critically ill mother, his only pleasures involve a few racy videos and occasional nighttime forays to find men willing to help him forget his troubles.

It was supposed to be a one-time, anonymous hookup—until fate intervenes and their mutual attraction blossoms into a furtive affair. Michael doesn’t date closeted guys, but for the haunted, lonely Nicky he makes an exception.

When Nicky’s mother takes a turn for the worse, Michael is forced to make a choice between idealism and compassion. And as Nicky’s needs spiral out of control, Michael realizes that a new set of ideals could be exactly what he needs to keep love in his life—for good.

Product Warnings Contains sex in the trees, sex in parked cars, and sex in other uncomfortable places. Tissues are required, because the ending will make you cry—and maybe make you want to call your Mom. 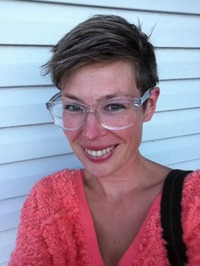 Bio: Born into the psychedelic wonder that was the 70s, Daisy Harris has had an interesting life so far. She’s been to Catholic school and Ramones concerts; danced to MC Hammer and Lady Gaga; and been a hair’s breadth from shipwreck twice. (Three times, if you count sea kayaks!)

As far as Daisy’s concerned, the best things in life happen by accident. Though she’s gotten better at planning over the years, she still writes, lives and plays by the seat of her pants. Her books are a happy mix of romantic comedies and coming of age stories, more often than not, inspired by the great films of the 1980s.

Daisy lives in Seattle in a house full of dogs and children. When she’s not writing gay romance, she can be found experimenting with new ways to cook kale. Every once in a while, she goes out to pay homage to the party gods of her youth–and maybe to find a little trouble.