“How far will you go to protect that thing?” He held my gaze for a long moment. 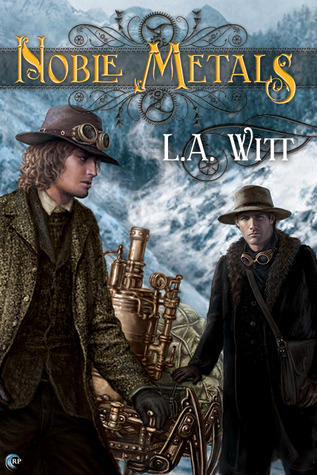 Blurb: Ever since Robert Belton gambled away the money to stake his claim in the Klondike gold fields, he’s been stranded in Seattle working as a prostitute. When an attractive customer needs help hauling provisions to the frozen north, Robert eagerly volunteers.

Dr. John Fauth is only searching for one thing, and it isn’t gold. He needs platinum for the prototypes of his revolutionary inventions, and if he doesn’t find it in the Klondike, his university career—and his research—is over.

Getting to the Klondike is a grueling, dangerous journey, and just hours after leaving Seattle, John and Robert find themselves in over their heads. John is carrying an invaluable device that his competitors will do anything to get their hands on. And as the cold nights and mutual desire pull John and Robert closer together, they discover that they have much more to lose than gold or platinum.

Review: I read L.A. Witt’s Noble Metals when it was originally published back in 2012, and liked it a lot. The imagination that went into the storytelling was a great blend of historical and technological, which is why Steampunk is one of my favorite sub-genres of fantasy. It also didn’t hurt that I loved the relationship between her two MCs, so when it was offered in its reedited and rereleased format from Riptide, I couldn’t help but want to give it another go-round to see if the story not only held up to my initial opinion but if it was, in fact, new and improved. The answer to both is an emphatic yes, the premise of the story is still fantastic, and the book itself is now polished to a practically perfect romantic shine.

Speaking of romance, let’s look at that first. Usually the R word describes the relationship between the characters, but the romance of this book goes beyond that to the time and place in which the novel is set. The Yukon Gold Rush of the late 1890s, a time when all manner of men remade themselves into prospectors who braved danger and the elements for the promise of striking it rich—oftentimes sacrificing everything only to come up short—gives a romantic feel to the plot. The physical romance of the storyline comes when Dr. John Fauth and Robert Belton meet in the brothel where Robert has been biding his time trying to make enough money to continue an aborted trip to the Alaskan mine fields. The chemistry between these two men was immediate and, I felt, believable.

L.A. Witt puts the rentboy theme to good use in Noble Metals, and yes, it’s become a familiar device in portraying the man who has to do what he has to do in order to survive, but I felt what could’ve been a tired cliché worked because of Robert himself. I loved his innocence in spite of what he’s had to do to keep from starving while he figures out how to follow his dream, and I also was glad the author didn’t try to sell his relationship with John beyond what it was in the beginning—an instance of some pretty earth shattering sex that was nothing more than a means to an end for both Robert and John.

The buildup of their relationship happens over a period of time when John and Robert have to work hard even to trust each other, let alone wonder about their feelings for each other. They work to fight off threats from a competitor, other prospectors, and also fight against Mother Nature’s cruelty. John puts Robert into danger by virtue of a device he’s invented that others want, and in the protecting of it, I felt there was a natural evolution in their bond that made Robert question his decision to follow John more than once, though in the end, that’s the means to a heart-tugging climax the author uses to make these two men finally reveal what’s most important to them.

The story is told from both Robert’s and John’s points of view, Robert’s in the first person narrative, John’s through the journals he keeps along the way, which gives the reader a glimpse into his deepening feelings for Robert. If you’re not a fan of the limited first person narrative, I thought this was a great way to overcome it, and I loved being able to witness the bond form and deepen between these two men at the same time neither of them realized how the other truly felt. The danger kept the plot flowing along at a brisk pace, which makes the book feel far shorter than its word count—it was over before I was ready for it to be, and I’m so excited there’s a sequel in the works for an early fall 2014 release.

The steampunk inventions in Noble Metals play an integral part in the trek the men make along the miles of rugged trail, and while there wasn’t a broad range of steam driven clockwork devices in the book, the ones L.A. Witt has given life to were remarkable simply because they were so easy to imagine as I was reading along, and the contrast of the mechs against the otherwise technologically spare times worked for me.

If you read Noble Metals and liked it in its original format, I’d definitely recommend giving it another read, especially to prepare for the further adventures of John and Robert. If you’ve never read the book and love your historical romance with a speculative twist, then this is as good a time as any to preorder this one and experience it for the first time.

You can Pre-Order Noble Metals here:

One thought on “L.A. Witt’s “Noble Metals” Is Better The Second Time Around”