“To err is human, to forgive, divine.” ― Alexander Pope 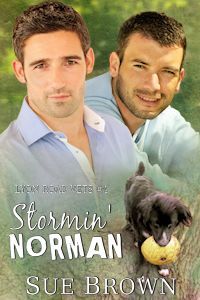 Blurb: Dan had been Jesse’s partner for many years, and always there for Jesse on his return from difficult assignments. However, after breaking his promise not to leave again, Jesse learns to his cost that Dan can be pushed too far. When he returns home, broken in body and spirit, Jesse finds his house empty and Dan in the arms of someone else.

To fill his life, Jesse decides to get a dog. His friends and neighbours take him to choose a puppy. What he doesn’t expect is for Norman to choose him. As Jesse takes on a new job, with Norman’s assistance, he realises that Dan isn’t far away, and he still loves him. Dan has moved on with his life. Can Jesse do the same?

Review: I have to say up front that one of my favorite types of stories is a second chance love story. I think what I like most about them is the underlying message of forgiveness, the fact that there has to be so much love there in the first place to give someone one more chance to hold your heart.

Sue Brown’s Stormin’ Norman begins with Dan and Jesse’s first meeting, and then we move forward to years later in their relationship. Unfortunately, the two men have come to a crossroads. Dan is tired of Jesse leaving for months at a time and just expecting him to be there waiting for him. Jesse’s job is dangerous, but it is very important. One of the only things to get him through his undercover missions is knowing that Dan is going to be waiting for him when he gets home.

When Dan gives Jesse an ultimatum, Jesse can hardly believe it is real. After all these years, he won’t have Dan to come home to if he leaves on another job. Thinking Dan will change his mind, Jesse leaves but not for the usual few months. When he returns a year later, he finds out that Dan wasn’t throwing around empty threats. He’s gone.

Knowing he can’t keep doing the job that cost him the love of his life, Jesse quits the company and tries to find something else to do now that he is alone. It will come as no surprise to anyone who has read the books to see Jesse go out and adopt a dog. He ends up tying together the training of his new puppy with a job opportunity, and it seems to be going well, but he doesn’t know if it can be his forever job.

When Jesse keeps running into Dan and his new boyfriend, his emotions are all over the place. He doesn’t blame Dan for moving on and finding someone new, but on the other hand, he wants Dan back. He has not stopped loving him, and he doesn’t know how to handle that. After hearing the same advice over and over from his friends, he tries to move on. When Dan sees Jesse moving on he begins to realize that he may not be quite as over Jesse as he thought.

Sue Brown has a very real talent with words, and I simply adore this entire series, but I have to say this is my favorite so far. I loved the fact that Dan grew himself a backbone and started taking what he needed instead of settling for what Jesse would give him. I also enjoyed how Jesse realized the wrongs he had done, and did his best to rectify his mistakes.

By the end of the story I was on the edge of my seat, waiting to see what would happen with these two men. The story unfolded slowly and just flowed right to the ending. As with the other books in this series, there is a very cute dog, two very confused men, and a fabulous love story. I would highly recommend this book and all of the other books in the series.