“I looked at Frank, wondering whether that was the connection I’d felt between us. Two murderers seeing one another for what they were. Death united us. Not love.” – Nicole Castle 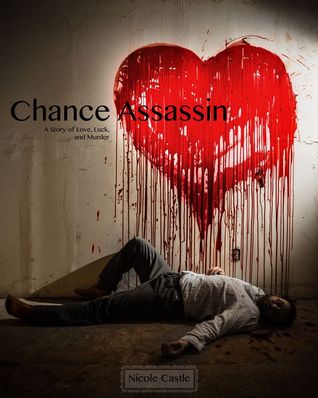 Chance Assassin: A Story of Love, Luck, and Murder

Title: Chance Assassins: A Story of Love, Luck, and Murder

Blurb: Vincent Sullivan is down on his luck. When a chance encounter generates a job prospect he’s too desperate to decline, Vincent is well on his way to a career in crime. But after the job goes wrong and he’s gravely injured in the process, things couldn’t get much worse. Except that he may have just killed a man.

With the entrance of a mysterious stranger, life is finally starting to look up. Unless his luck is about to run out for good.

Review: I spent a lot of time before writing this review trying to decide whether I was going to call Chance Assassins: A Story of Love, Luck, and Murder a romantic novel. My final opinion, after much pondering, is that Chance Assassins is the most deliciously fucked up romance I’ve ever read, and it’s perched at the very top of my list as the best book I’ve read so far this year.

Nicole Castle has written a masterpiece of unconventional romantic fiction, narrated by the endearing and magnetic young antihero Vincent Sullivan. Vincent is just sixteen years old when the story opens, but he’s far from an innocent, wide-eyed teen. Orphaned and having sex with married men from the time he was twelve has informed every single aspect of Vincent’s being. Simply put, Vincent is an opportunist who’s not averse to giving blowjobs and letting men use his body to keep a roof over his head, but he draws the line at prostitution. Vincent equates sex with security to a certain extent because it’s an affirmation of his desirability, but sex is also insecurity because it’s no guarantee that he’ll be kept. Vincent’s unwitting vulnerability is what makes him the perfect target for Charlie, the man who hires Vincent when the boy is at his lowest, to pull off a job that ends in Vincent being stabbed and him committing his first murder.

Frank Moreaux is the man who answers the hotel room door when Vincent stumbles miles through the snow, bleeding and nearly dead on his feet, to get to Charlie—whom Vincent is sure will be able to put him back together again. For Vincent, even in his stuck pig state, it’s love at first site when the tall, dark and handsome stranger answers the door and catches Vincent in full swoon. Frank is as cold and deadly a killer as has ever been written: enigmatic, provocative, brutal at times, but is, at the same time, innocent in many ways. Where Frank is a socially dysfunctional introvert who reads with a passion understood only by the book obsessed, Vincent is a socially dysfunctional extrovert whose knowledge of pop culture and his running monologues often befuddle Frank, and watching these two fall in love—Vincent trying his sixteen year old best to seduce the man twice his age (who Vincent is also sure is straight and hates him)—is exquisite. These two assassins fall in love while ending the lives of the unfaithful, and with every single hit, the reader is rooting for the killers to win.

Frank and Vincent’s sexual relationship begins when Vincent is just seventeen years old, so if the idea of that makes you uncomfortable this is probably a book you’ll want to avoid, but the fact of the matter is these two men work so perfectly together that it’s easy to forget V is the younger of them, not to mention the line is often blurred between who is predator and who is prey. Vincent is the Narcissus, Frank’s eyes the pools into which V gazes and is lost. These men are both so broken in such utterly different ways that together they make an entirely new sort of broken that makes them whole. Their immoral compasses are so attuned to each other, they’re both so entirely without conscience yet are so incredibly in sync with each other, that together the rough sex and the violence in general are as seductive to read as it is for Frank and V to participate in.

I’m in awe of this author’s ability to write a story starring not one but two characters who should be unappealing in every way. Nicole Castle has made Frank and Vincent loveable to a degree that has left me obsessing over this book. It’s a hallmark of truly brilliant storytelling I haven’t experienced since reading Maria McCann’s As Meat Loves Salt and I fell for the insane Jacob Cullen. This author’s writing style is fresh, her characters funny and vibrant, her version of romance refreshing, and this book is one disturbing, endearing, horrifying, and sexy surprise after another.

, the continuation of Frank and Vincent’s incomparable love story, is already loaded on my Kindle just waiting to be devoured, word for delightfully twisted word.

You can buy Chance Assassins: A Story of Love, Luck, and Murder here:

Chance Assassin: A Story of Love, Luck, and Murder