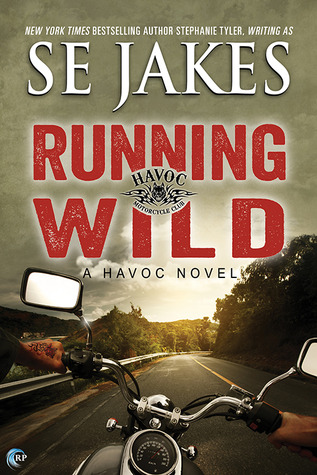 Sean Rush is an adrenaline junkie. That’s why he was in the Army, why he steals and races classic muscle cars . . . and why he can’t stay away from bad boy Ryker, a Havoc Motorcycle Club lieutenant. Fortunately, Ryker can’t seem to stay away from Sean—he’s spent the last eight months breaking into Sean’s apartment and stealing into his bed, leaving Sean physically satisfied but increasingly restless.

Sean has always avoided relationships. He likes to come and go without being controlled. And Ryker is possibly the most controlling man he’s ever known. Still, he finds that he wants more from Ryker than their silent nighttime encounters.
Then one of Sean’s thefts goes bad, and Ryker’s protective instincts kick into overdrive. He takes Sean to the Havoc compound, determined to keep him safe. But Sean’s past threatens the safety of Havoc—and everything Ryker holds dear. Worse, Ryker’s hiding secrets of his own. Soon it’s obvious that the adrenaline rush can’t keep them together anymore. But maybe love can.

Review: Running Wild is the first book in S.E. Jakes’ new Havoc series. It is about Sean Rush, who was born to a bank robbing murderer of a father, and a drunk of a mother. At fifteen he was on his own, trying to survive when he stumbles across Al, who teaches him how to survive by stealing and racing cars. Eventually he was placed in juvenile detention for fighting, where he met a very scared Noah, whom he ended up protecting and befriending. He also becomes friends with Billy, the Sherriff’s brother, and all three of them are sent to the Army for rehabilitation. Rush’s time in service is over and he is left with PTSD from the death of his best friend, Billy, and his past abuse from living on the streets.

The story begins when Rush has had a nightly visit from his “break in” lover, Ryker, whom he met at a bar months before. Ryker breaks in to Rush’s house randomly for a so called bootie call, or that’s what Rush perceives until he starts to realize that it is more than a “house call”. He is so caught up in his head and his past that he cannot see love, even when it is standing right in front of him. He is working as a mechanic at Edmonds with Noah, trying to live a legit life when he is dragged back into the fast paced life of stealing and racing to again save Noah. He has no idea that when he reenters this life there is no way out due to the mess that Noah has created.

Ryker, tattooed bad ass, and a longtime member of the MC club Havoc, has been watching Sean Rush for years. Finally, one night at Bertha’s Bar, Sean propositions Ryker and Ryker is hooked. He appoints himself Rush’s guardian angel, whether Rush wants one or not. Rush is under the protection of Havoc, or so we think, as long as Ryker considers Rush as HIS.

S.E. Jakes can write the hell out of a tortured soul with a horrific past, all tied up with a perfect bow of guilt. Her stories are fast paced, with hot men and hot sex, but can also be tender and heartbreaking. You cannot help but fall in love with her characters. She is one of the few authors whose books I can read again and again and again.

This story has everything you would want in a m/m book. It has hot, sexy men with tortured souls who are too stubborn and scared to trust or love. The only reason I gave this book a 4.5 vs. a 5 star rating was because it took me a good 20 to 25% to get hooked into the story. Remembering back to her past series, the first book lays out a lot of groundwork for future stories and characters, and it took me a while to wrap my brain around the storyline, but once I passed 25%, I could not put it down until the end. I am now a Rush and Ryker fan and have new book boyfriends (like I need another)… This is a great start to a new series! I cannot wait until the next book. Hopefully the next will be about Casey, Sweet, or maybe Linc and Gypsy. So many possibilities and so excited!!!!!! Enjoy!