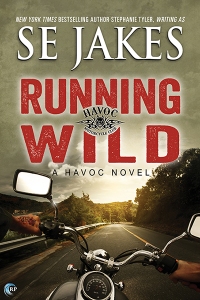 Thanks so much to The Novel Approach for hosting me on the tour for Running Wild: Havoc Book 1. This is the start of a brand new series, with different heroes for each book and HEAs at the end of each book. Sean Rush and Ryker stole my heart a long time ago, and I’m excited for you guys to meet all of them.

TNA: What’s your idea of a great protagonist? Do you think you have a “type” when it comes to the characters you write?

SE: I definitely love alphas. Those are the characters who present themselves to me most often, although I’ll have an occasional alpha-lite (Blue and Sean come to mind.) I love military men. And men who do things above the law for good reason, or because they can’t stop themselves (again, Blue and Sean) but the bad things don’t hurt people.

TNA: Who would you say is the sexiest character you’ve ever written? What makes him so sexy?

SE: Wow, I have to leave that to readers in the comments. All my characters want to do is jump into bed, and I realize there’s a difference between sex and sexy, But many of them are so free when it comes to sex, and through sex is how they communicate and so I think that makes them sexy. But really, tell me because I want to know what you guys think!

TNA: Was there a particular author or one particular book that convinced you to start writing M/M? What was the catalyst?

SE: I’ve been writing m/m subplots since 2006 (my Sydney Croft books) so I know I’ve always loved m/m. But the catalyst for writing a pure m/m was definitely two things—Sarah Frantz (my Riptide editor) and Force of Law by Jez Morrow. I discovered that book when Sarah wrote a review of it. And that’s when I was like, “I’m totally doing this.”

TNA: Do you have a routine when you write? Any superstitions, a certain order in which you do things, or is each new novel a unique experience?

SE: I always use a Clairefontaine notebook, but not a different one for each book. It usually takes about a month to fill so in each notebook you’ll have notes from like 5 different books, random things I need to remember to do, blog posts. And I love Precise V7 fine point black pens. AND if someone uses the pen, I have to start a new one. (That’s not weird, right?) Other than that, no superstitions at all! Ahem. Oh, and I write in bed on a laptop. In fact, for my office, I bought a bed instead of a couch. Totally normal.

TNA: If you could go back to the moment you sat down to write your first published novel, what advice would you give yourself now that you have the benefit of experience?

SE: Always remember the fun you’re having RIGHT NOW writing the book. That’s the best part of this job and it’s so easy to get caught up in everything else that is a part of publishing. If you’re loving what you’re writing, someone else will.

TNA: Of all the books you’ve written so far, which would you say is your favorite, and why?

SE: Another hard question! I do love all of them (because trust me, I couldn’t write something I didn’t) but there are favorites / special ones because they represent certain things to me. So Hard to Hold by Steph Tyler is my first single title ever and it’s about a character who’s been in my mind forever. My first m/m, Bound By Honor, because it was a turning point for my career. And Prophet’s books, because through him, I’ve found a whole world of other characters. (Prophet, btw, is not happy with Ryker at this moment, since he hears readers telling me how they think Ryker is their favorite character ever. Character Wars!!!) And I have to say, Running Wild is one as well, because I actually wrote the first several chapters back in like 2003—so Sean and Ryker have been with me on this journey, waiting patiently for their turn.

Sean Rush is an adrenaline junkie. That’s why he was in the Army, why he steals and races classic muscle cars . . . and why he can’t stay away from bad boy Ryker, a Havoc Motorcycle Club lieutenant. Fortunately, Ryker can’t seem to stay away from Sean—he’s spent the last eight months breaking into Sean’s apartment and stealing into his bed, leaving Sean physically satisfied but increasingly restless.

Sean has always avoided relationships. He likes to come and go without being controlled. And Ryker is possibly the most controlling man he’s ever known. Still, he finds that he wants more from Ryker than their silent nighttime encounters.

Then one of Sean’s thefts goes bad, and Ryker’s protective instincts kick into overdrive. He takes Sean to the Havoc compound, determined to keep him safe. But Sean’s past threatens the safety of Havoc—and everything Ryker holds dear. Worse, Ryker’s hiding secrets of his own. Soon it’s obvious that the adrenaline rush can’t keep them together anymore. But maybe love can.

FYI, I’m also writing a m/f MC series under the Steph Tyler name—the first book of that series, Vipers Run is out now as well. And there’s a very light crossover in that you’ll see names of MCs that are main characters in my Vipers series—namely Vipers MC, along with the Heathens. Havoc’s friendly with Vipers, not so much with Heathens (they seem to be everyone’s enemy at the moment).

SE Jakes writes m/m romance. She believes in happy endings and fighting for what you want in both fiction and real life. She lives in New York with her family and most days, she can be found happily writing (in bed). No really…

She spends most of her time writing but she loves to hear from readers!

SE Jakes is the pen-name of New York Times Bestselling author Stephanie Tyler (and half of Sydney Croft) — please go to my media kit to learn more!

One thought on “SE Jakes Is “Running Wild” Today, With A Giveaway”