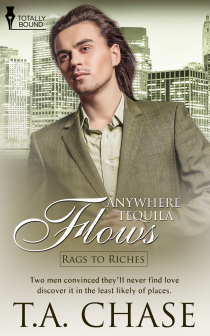 Sidney Richardson has watched his two best friends fall in love, leaving him to wonder if he’ll ever find the right man for him. Sure, he’s been playing the field since he discovered sex, but he’s never taken a chance on one of those one-night stands to see if there might be more. Now he’s ready, but is the man he’s waiting on ready as well?

Tito Perez has had a rough go of it, but he’s finally in a good place in his life. He’s got a great job and a group of marvelous friends. Who cares that he doesn’t have that one special guy in his life? Some people just aren’t meant to fall in love.

Then a chance meeting between boss and employee gives Sidney and Tito an opportunity to put their hopes and dreams into action. Will love flow as easily as the tequila Tito pours?

Review: Anywhere Tequila Flows is the 4th book in the Rags to Riches series. Sidney finally gets his book! After Sidney watches his best friends fall in love and either marry or move in with the love of their lives, he decides maybe it’s time to put his playboy status to rest. He is a smart, wealthy, and successful business man who has a reputation for being a indiscriminate playboy, but when asked the question, “Who do you see yourself spending the rest of your life with, a woman with children, or a man?” he decides a man and a very specific one: a tattooed, ex-con, ex-gang member bartender named Tito. Sidney has been attracted to Tito for over a year. His problem is that he is an employee. It never seems to bother him that Tito is an ex-con or that he comes from a completely different background. Tito’s bad boy image and fierce loyalty to his friends seems to hook, line, and sink Sidney immediately. Sidney finally gets the opportunity and the guts to make an advance on Tito, which he quickly accepts.

This is a novella that throws you into the mix at the first page. This book follows the template laid out in the Rags to Riches series, where a rich prince charming falls in love with someone who has lived a deprived, poor or painful life, and is finally seen for their personality and heart instead of being judge by their past. We are told of Sidney’s year old attraction to Tito at the beginning, and after the wedding, where Tito is the bartender, their lust for each other quickly escalates over the next few days. The main characters are endearing and you cannot help but fall in love with Tito and his love and loyalty for his friends, especially Linda/Larry, but the story is too short to fully complete the storylines developed by the author. There is insta-lust which turns into insta-love after a few dates. Tito shows a glimpse of doubt about the possibility of Sidney until Linda smacks him down and explains he deserves happiness more than anyone. There is a development from his past that attempts to destroy their future, but the author quickly resolves the issue with no repercussions.

If you like this series, the story falls right in line with the other three books. It is short and sweet with a HEA. It is good comfort reading for a Sunday afternoon. It would have been nice to have a more in-depth understanding of Sidney’s life, and also the situation involving the gang issue. It seemed to be glossed over and then next thing you know, there was an epilogue. I am a T.A. Chase devotee because her characters are easy to love. I do hope the she writes a story about Linda/Larry, because it would be wonderful to see her have a happy ending. Enjoy!

You can buy Anywhere Tequila Flows (Rags to Riches #4) here: