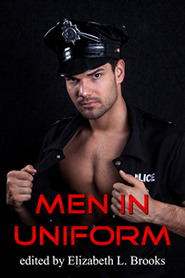 Blurb: There’s just something about a man in uniform, no matter what kind of uniform it happens to be. In “Best Laid Plans” by M. Durango, Craig gets a blast from the past when his new delivery man turns out to be his college boyfriend, Ryan. In “Seven Steps To Heaven” by Emily Moreton, stripper Steve finds that hooking up with a hot police officer is easy, but navigating what comes next, that’s the challenge. In “UPSex” by Rob Rosen, Don loves a man in uniform, especially Ernie, his brown-clad UPS man with the ample empty space in the rear of his truck. Gunshots rip through an idyllic neighborhood and soon Rick and Gabriel are combing the mountains for a kidnapped child in a search that becomes much more, in “Crossfire” by Jon Keys.

Jonathan dreams of doing unspeakable things to the men in red uniforms at Windsor Castle, and in “The Queen’s Guard” by Emma Jane, he gets his wish. In “Nurse Levi” by L.J.Hamlin, when a nurse patches up a fireman, will there be more than sparks? In “What Can Brown Do For You?” by Hunter Frost, a freak power outage traps IT geek Sean Barlow in the office elevator with the dreamy UPS guy, where he learns first-hand that you can’t judge a UPS guy by the size of his package. Candymaker and mage Sam Burke desperately tries to avoid his ex-boyfriend, Bret in Mychael Black’s “Midnight Magic.” When Bret doesn’t take the hint, in steps Officer Micah Holmes to save Sam from Bret’s magical wrath.

Review: Men in Uniform is a collection of stories about, you guessed it, men in uniform. From the sexy UPS guy to a Windsor guard, this little collection will surely satisfy anyone with a little kink for a man in uniform. I know I was satisfied, and I thoroughly enjoyed this little gem. I was very impressed with the quality of the writing and storytelling, and these morsels of uniformed sexiness left me wanting more!

The stories in Men in Uniform run the gamut of delivery man reconnecting with lost love, a stripper realizing his cop fantasy will be his reality, and a geek snagging the hottest UPS man around. All these stories were fun, engaging and most of all, HOT! All your fantasies come to life. But the one that got to me was Seven Steps to Heaven by Emily Moreton. The story’s about a stripper, Steve, who finds a dead body outside the club where he works, and Cameron, the cop, who first arrives on the scene. The story is told in seven parts, and those parts add up to one entertaining tale. There is an immediate attraction, and the fun is in watching it unfold. My favorite scene was when Cameron came to the club to watch Steve dance. It was very cute and sexy!

I just could not get enough of Steve and Cameron. Cameron as your typical Alpha male, all hard, possessive and sexy, and Steve was your sex on legs stripper. When you put these two archetypes together, and the author knows exactly how to write them, sparks fly! What else can you ask for? The sexual chemistry was off the charts and over time, they developed a deeper connection. But I was a bit disappointed with the ending because the story just…ended! Don’t worry, it was happy, but I wanted to know what happened the next day. I wanted more! And I would definitely read a full length novel. ::Hint Hint::

Men in Uniform has something for everyone, perfect read on a rainy afternoon or lounging by the pool.

You can buy Men in Uniform here: