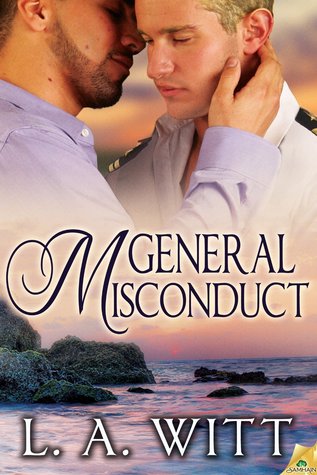 Blurb: A chance encounter, a chance at love…and one heartbreaking choice.

Ensign Aiden Lange is taking a hike—and it’s not for the pleasure of seeing Okinawa’s Hiji Falls. It’s in the hope that claiming he took a fall on the rocks will cover up the fact he was beaten up in a gay bar. Not a place a Naval Academy grad wants to get caught if he’s serious about his career.

At the end of the trail, a surprise comes with the scenery. A gorgeous young guy in swim trunks.

Connor didn’t come up to the falls to find a man, but he’s instantly intrigued by the ensign with the bandaged eyebrow. A hike turns into dinner, and before he knows it, he’s up to his heart in love with the gentle, infinitely patient Aiden.

It’s a small world, though, and an even smaller island. It’s only a matter of time before they’re caught by a man who’s more than just Connor’s overprotective father. He’s also Aiden’s high-ranking boss. Someone with the power to force Aiden to choose—Connor, or his naval career.

Review: When I read the first book in this series, I just adored Aiden and felt so bad for him when he was beaten up, so I was thrilled when I found out the second book of the series was going to be Aiden’s story. Of course, it wasn’t all sunshine and roses for Aiden and Connor, but we all kind of expect that, don’t we?

When Aiden set out to climb up to Hiji Falls, it isn’t for sightseeing and it definitely wasn’t him looking to hook up. Aiden was trying to set up a cover story for the beating he took at an off-base gay club. Even with DADT a thing of the past, being gay and out can still tank a career if you aren’t careful. Even the best laid plans can go awry, however, when you are faced with a gorgeous man in a beautiful setting.

When Aiden reaches the falls and sees Connor swimming, he is so attracted to the young man he almost forgets all about why he was up there in the first place. Aiden and Connor start with a dinner date and over time, they find themselves in an honest to goodness, head-over-heels love affair. The only thing that could derail their happiness ends up banging on Aiden’s door one night and putting the two men in a very uncomfortable predicament.

Aiden’s commanding officer is at the door, and it turns out he is also Connor’s overprotective father. Connor and Aiden are forced to make a decision: do they defy Connor’s father and continue to explore their relationship, or do they buckle under his demands?

I absolutely loved this second story in the series. Ms. Witt has done a fabulous job with the scenery and the customs of the island. I lived in Japan for two years myself, and reading this book brought back all kinds of great memories. The military aspects of the book were spot on, and that is always a win in my opinion.

What I liked best about this book was the fact that when these two men made a decision, they stuck with it, and had a “damn the consequences” attitude about it. They stuck to their guns and that makes all the difference sometimes.

It was wonderful to see the guys from the first book again and to get to see them still together and happy. I hope there will be another book in this series. I will be sure to snatch that one up quickly. If you like to read about military guys and know that you are getting a real representation of the lives they lead, then you cannot go wrong with either of the books in this series. I would highly recommend this title and any others Ms. Witt gives us in this universe.

One thought on “Two Men Find Love In The Military In L.A. Witt’s “General Misconduct””