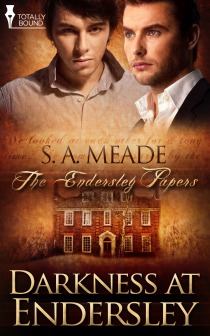 Blurb: Joshua thought he’d left his past behind, but there’s something in the darkness at Endersley.

Joshua Endersley is glad to leave a broken engagement and his sordid desires behind in London and claim his inheritance on the rolling downs of Wiltshire. What he doesn’t need is temptation in the form of artist, Daniel Wyndham, to remind him of all he wanted to forget.

Joshua finds Daniel impossible to resist and the two men embark on a passionate affair that draws them ever closer. Joshua believes that he can find happiness and live his life the way he wants to in the peace and seclusion of Endersley.

But nothing good can last forever. The very remoteness and solitude that Joshua loves about Endersley turns against him—the darkness at Endersley is deeper and more dangerous than he could have ever imagined.

Review: I am normally not a huge fan of historical books, but I found that I really liked this story, and may have even found a tiny bit of love for historical romance stories that I wasn’t aware I had deep down inside.

The story begins with Joshua Endersley breaking off his engagement to a less than sane young lady. Between an angry father and flying vases, Joshua decides he might be better off out in the countryside with his Uncle.

After claiming his inheritance Joshua finds himself loving the simplicity of country living and settles in quickly. He couldn’t have asked for a better place to avoid the temptations of the male brothels in London. Each time he sated himself, he would feel guilty for days after, and that was no way for him to live.

The arrival of an artist, Daniel Wyndham, puts temptation right back to the forefront for Joshua, and it seems the attraction is mutual. While Daniel is in residence to complete the commission he has taken to paint Joshua’s house, the two men try to put their attraction aside. Eventually they can’t fight it any longer, and they begin a fairly torrid affair.

Due to the unfortunate circumstances of the time they live in, they obviously can’t live out in the open. To keep up appearances Daniel chooses to leave, traveling and taking on more commissions, and Joshua goes to London to see him as often as he can. Both of them hate being separated, but they can’t find a way to be together and not end up in prison.

When Joshua’s ex-fiance’s brother takes an interest in them, and tragedies begin to happen around them, they don’t know who to trust except for one another. When the tragedies start to happen at Endersley, and a surprise visitor brings with him the identity of their enemy, they have to fight the final battle for their lives on home turf. Hopefully Daniel, Joshua, and their friends will be able to survive.

I think this book worked for me because it was written so well. I fell in love with Daniel and Joshua from the very beginning. These two men loved one another, and they would do anything they could to be together, no matter the consequences. I haven’t read the first book in the series, which is Joshua’s Uncle’s book, but I believe I will have to go and buy that one next. S.A. Meade has a wonderfully descriptive writing style, and I truly felt like I was right there at Endersley with these characters. I don’t know who the MCs will be in the next book of the series, but I will surely be picking it up. I would highly recommend you give this one a read.

You can buy Darkness at Endersley (The Endersley Papers #2) here: