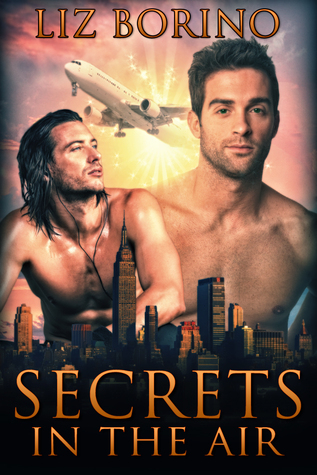 A love defying all odds…

Secrets in the Air

Flying is in Rhett O’Neil’s blood. And nothing makes this pilot fly higher than wrapping himself in his husband Kaden’s arms. He’s thrilled when his grandfather entrusts him with O’Neil Airways, the family’s charter airplane business. With a mix of humanitarian and corporate clients, Rhett plans a bright future where his success improves the world.

Elise, Rhett’s mother, begins offering advice to “help” her son through the transition into increased responsibility. As evidence surfaces that her words are escalating into devastating actions, the truth comes out about the death of Rhett’s sister Annabelle. Kaden has to race to protect his husband and himself from the consequences of the Secrets in the Air before it’s too late.

Liz Borino transcribes the world inside her head onto the page, and shares it with the people who are stuck in the “real world” to makes their lives a little more interesting. Because in her world, heroes fall and stand up again with the help of their partners and friends. Liz’s world is littered with formidable obstacles, which her heroes overcome with a fire of courage and passion. The beauty of love between two men is celebrated. Who wouldn’t want to live there?
When not with her heroes, Liz enjoys exploring cities, old abandoned buildings, working toward social justice, and editing for other authors. Liz published eleven books since 2012.

5 thoughts on “Welcome: Liz Borino and the “Secrets in the Air” Blog Tour and Giveaway”