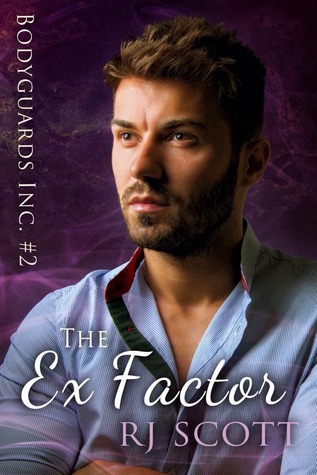 Blurb: When Bodyguard, Ben Collins, finds Daniel Lincoln in a room, hiding and hurt, he doesn’t immediately think Daniel is the victim of abuse. Daniel is good at pretending and being a finalist in a TV singing competition he seems like he has it made.

But something about Daniel calls to Ben’s need to protect and he hands Daniel a card to contact him if ever Daniel needed help. Abruptly, after one frightened phone call from Daniel, Ben is racing to Daniel’s aid and what he finds is a horror he can’t imagine.

Daniel is trapped in a relationship where anger and controlling hate are the only emotions he is given. When his boyfriend crosses the line and leaves Daniel vulnerable and broken there is only one man that he wants to call.

The sexy bodyguard who promised he could help him.

Review: On the surface, The Ex Factor could be just another story about a bodyguard that falls in love with his client. Instead of the simple love story, however, this book turns out to be a very deep story about abuse in same sex marriages. There are no on page scenes of the abuse Daniel suffers, but the outcome and the subsequent issues Daniel has to live through are covered very well.

Daniel was competing on a reality TV music show Ben was working on. When Ben finds Daniel secluded in a room and in pain, he has no idea what is truly going on in Daniel’s life, but he offers him help if he ever needs it, and gives him his business card.

Later, when Ben receives a call from another competitor on the show telling him Daniel is in trouble, Ben races to the rescue. What he discovers when he gets to Daniel not only angers him, it makes him feel guilty about everything he missed the last time he saw Daniel.

Ben begins to help Daniel rebuild his life, both professionally and personally. When they begin to grow closer, Daniel feels like he doesn’t have anything to offer Ben, but Ben helps him to see himself as a man no matter what his ex has done to him. Once they get on the right track, their romance is pretty special.

I feel that RJ Scott did a great job of showing the devastation that occurs both during and after living in an abusive relationship. She also showed us that no matter how bad things may seem there is always still a chance at a happily ever after. I loved the way Ben was gentle with Daniel when he needed it, but forceful when he had to be. I can’t recommend this book enough. If I didn’t have a TBR pile a million feet high, I would be rereading this one immediately. The Ex Factor could very well be my favorite RJ Scott book to date. You won’t want to miss this one.