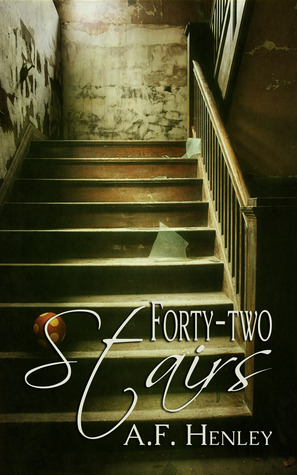 Blurb: Owen has been struggling with addiction since he was a teenager, but it takes a DUI involving another vehicle for him to finally face his issues. The road to recovery is a rough one, and for Owen it’s a journey made harder by bankruptcy, loneliness, and repressed memories.

His new apartment doesn’t help either. It’s small, worn, and hot as hell. The only way to reach it is a tedious stretch of stairs that seems like the final insult on top of a whole pile of misery. Thankfully, the mess comes with one bright spot: intense, pretty Sebastian, who seems to have a knack for keeping his head up and finding the beauty in everything.

Review: Most abrupt ending ever. That was my first thought when I finished reading Forty-Two Stairs. The story just stopped. I was sure it had to be because I had an ARC and it was missing the last few pages. This was not the case. It just ended. I have to hope that A.F. Henley intends to write a sequel, but if so, it will need to pick up immediately with the next sentence which was sorely lacking in Forty-Two Stairs.

Owen is at the lowest point in his life, a repeat DUI has resulted in his losing everything—his job, boyfriend Eli, and home they shared. This time there was almost a tragedy, and Owen finds himself in a much more serious situation than before. While the judge grants probation, Owen needs to start over with almost nothing. He finds himself moving into a tiny apartment. One which his brother, while helping him move his meager possessions, repeatedly reminds him has forty-two stairs which need to be climbed to reach it. This is a nod to the Twelve-Step program that Owen is working as a way to meet the conditions of his probation and stay sober.

Owen’s downstairs neighbor, whom he meets while moving in, is the purple-haired Sebastian (Baba), who is the highlight of the book for me. Owen’s brother looks at him like he’s a freak, but he is nice enough to help them with the move. Repeatedly climbing those forty-two stairs to reach Owen’s new apartment is a hellacious journey that Sebastian assures him will become easier as he gets used to it.

Forty-Two Stairs takes us through the progress of Owen and Baba’s relationship. Owen is told ad-nauseum by both his brother and his sponsor that a new relationship will hinder his recovery. Any major life changes may take his attention and energy off the task at hand, which is to stay sober. As all those who are familiar with addiction know, overcoming the physical addiction isn’t always the hardest part of recovery. There are many secrets in Owen’s past which caused him to turn to the solace offered by alcohol as early as a teenager. Baba has a laundry list of his own issues and in no way wants to impair Owen’s recovery.

There’s just something so appealing about Baba. He has an indefinable quality to which Owen is drawn, despite the warnings to the contrary. He responds so perfectly to Owen, somehow knowing what he needs to say to help Owen deal with the memories from his past that he didn’t realize were there. I hope that if there is a sequel to Forty-Two Stairs, A.F. Henley uses it to give us a better look into Baba and his story. I’d love to spend some time getting to know him, to glean insight into his past and how he wound up maintaining the apartments.

Owen and Baba are two men who definitely aren’t perfect, both carry steamer trunks’ worth of emotional baggage, but they decide to make the journey that is their lives, and realize that moving forward with someone to lean on is easier than doing it alone. And that the someone they choose to lean on doesn’t need to be perfect.

The times Baba and Owen spend together late at night on the roof are part flirting, part counseling, and part developing a deepening friendship. These are the best moments in the book. As that flight of Forty-Two Stairs becomes less of a chore to climb, Owen’s life changes for the better and his feelings for Baba deepen.

My dissatisfaction with this book comes not from the characters or plot but from a story that had great potential but didn’t live up to that potential for me. I realize that many people really liked this book, but it just didn’t work well for me. That is the great thing about the M/M romance genre,though—there is an author and a book for everyone’s tastes.

You can buy Forty-Two Stairs here: