“Sometimes giving up control could very well be the cure to one’s spiritual sickness. Or whatever.” – Hayden Thorne 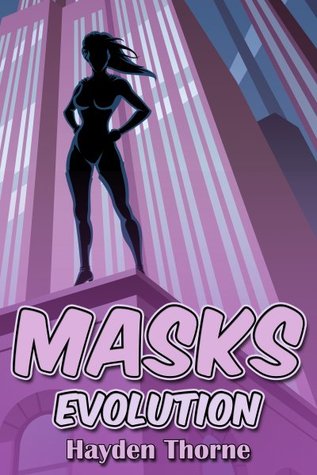 Blurb: While his friends continue to develop their newfound powers, Eric begins to feel the effects of being the odd man out. Around him, things go from bad to worse for Vintage City as the Shadow Puppet, a new supervillain, steps into the Devil’s Trill’s shoes and wreaks havoc with his army of killer mannequins.

Magnifiman, Calais, and Spirit Wire have their hands full, with the Puppet proving to be much more slippery than the Trill and leaving the good guys scrambling for clues. Work-related stress creeps into Eric’s relationship with Peter, which reaches the breaking point when Peter takes a new superhero under his wing: a fire-wielding teenage girl, whose awesome powers could make her a better match for Peter.

To make matters worse, there are the strange headaches, sleepwalking, and nightmares that haunt Eric, as well as the Devil’s Trill’s call for him to take his place as a supervillain sidekick. There’s also Brenda Whitaker, her mysterious past, and her sudden desire to help Eric as he struggles to figure himself out and make the right choice before his parents ask him again about his awful Geometry and Chemistry grades.

Once upon a time, there was the Queen Mother of all cliffhangers.

Okay, there’s loads of other things that happen before that, which I admit is all quite important to the storyline, so let’s focus on that as well, shall we?

Mined from the rich vein of comic book action, Hayden Thorne gives us more superheroes and, of course, supervillains in Masks: Evolution, the continuing adventures of sixteen-year-old Eric Plath, his boyfriend Peter Barlow, and their friend Althea Horace.

There’s no small amount of trouble in paradise in this episode of the series. There’s plenty of trouble in Vintage City too, the perfectly dreary and gritty locale that has given birth to the genetically enhanced and psychologically manipulated humans who make up the opposing sides of justice and mayhem in this at once chaotic yet somehow familiar metropolis, where the only difference between there and here is that the criminals and crime fighters are a lot more entertaining. Reading Rise of Heroes, book one in the Masks series, is an absolute must (not to mention an absolute treat) before you delve into the fun of Evolution, so keep that in mind if you’re looking for a summer read that stars a hero whose one superpower is his wicked sense of sarcasm. Well, that and his raging libido.

As if teenage angst weren’t enough in its own right, not only have Eric and Peter hit a sinkhole in the road of first love, but Eric also goes through quite a transformation in this episode of the series, providing the book with its title. Following the mischief dealt at the hands of the Devil’s Trill in Rise of Heroes, our poor, average, horny Eric—who’s beginning to resent being dismissed because he’s unremarkable and can’t possibly understand the burden of responsibility Peter and Althea carry as Calais and Spirit Wire—is ripe for the Devil’s Trill to carry out his evil plans to manipulate Eric to join the dark side. Did someone say sinkhole? I did. That sinkhole in Eric and Peter’s romance is more like the Grand Canyon. Did someone say cliffhanger? I did. And that cliffhanger is more like a cliff jump without a parachute.

Hayden Thorne captures Eric perfectly, his sense of humor, his sense of insatiable, hormone laden teenage horniness, all the things average kids worry about—chores and homework and love—and all the things this wonderful kid worries about—chores and homework and love and, most of all, not being enough for Peter. There is nothing at all trivial in the treatment of Eric’s worries and woes. He is every teenager who believes that his life can’t get much worse and no one else could possibly understand what he’s going through—the difference with our dear Eric is he’s absolutely right. When bizarre things begin to happen to him, Eric’s anxieties become a self-fulfilling prophecy, and let me tell you, if you have even one heart string to pluck, Ms. Thorne will play it like a harp.

New heroes, new villains, new threats to friendships and family leaves me excited to recommend this series wholeheartedly. If you love action and adventure wrapped in a young adult package that reaches beyond its intended demographic, the Rise of Heroes and Evolution are must reads.

And that cliffhanger I keep coming back to? The parachute arrives in September with book three in the series. Phew!

You can buy Masks: Evolution here: