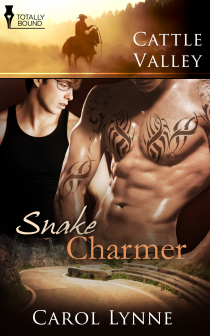 Blurb: Sometimes it takes finding an opposite to show us the beauty within ourselves.

When security consultant and ex-mercenary, Gabrielo ‘Snake’ Barbas, thwarts an attack of one of his co-workers, Riley Banks, he takes it upon himself to keep the smaller man safe. His job is made harder when he discovers the attacker is actually Riley’s ex-boyfriend, a ruthless man from a very wealthy and powerful family.

After a night of passion, Snake decides to take Riley far away from Richmond, Virginia to a town in Wyoming for the annual Cattle Valley Days celebration. He should have known that sex with Riley wouldn’t be enough, but he feels he has nothing else to give such a nice guy. Riley is the sexiest man Snake’s ever taken to his bed despite Riley’s claim otherwise.

Riley knows he’s average-looking at best, so why does Snake continue to flatter him? It’s obvious he’s not going to kick Snake out of bed, even after Snake informs him that sex is all he has to give. Why does Snake see him so differently than the rest of the world?

Review: What can I say? Carol Lynne has successfully written thirty-one stories about Cattle Valley, and I cannot wait for number thirty-two. I have read every one of these books, and I can honestly say that I absolutely love over 99% of them. The only ones that are not my favorite are the ones that are WAY TOO SHORT! I think I have read this entire series twice. If you are a fan of this series or a fan of Carol Lynne, you will love it! Reading Carol Lynne is like crack. I am totally addicted and have read every book she has written.

This story begins with a newer character that was developed in Fingerprints and Muddy Feet, Gabrielo “Snake” Barbas. He is a security consultant, ex-merc and love interest from Ryan’s past. He was also raised in a MC gang, covered with beautiful tattoos and rides a Harley (what else needs to be said?). Snake works for Tisdale security and has had his eye on Riley, a cute accountant with glasses and a “bubble butt”. He has always wanted to approach him for his famous one night stands but is afraid that it might be against company policy, until Riley is threatened by his ex-lover, Cal Nieman, a tobacco plantation heir from North Carolina. Riley was previously hospitalized because of Cal’s abuse, for which Cal actually served some time. Riley has a restraining order against Cal, which he ignores, and becomes a threat to Riley again. Snake steps in and feels the need to protect Riley even if it costs him his job. Due to the influence of the Nieman name, Snake decides to take Riley to Cattle Valley while he tries to extinguish the threat back East.

Obviously, there is an immediate attraction between the characters, and they both struggle with their own personal issues about having a relationship. Snake is extremely blunt, and Riley is more of the self-deprecating type but does have his moments where he becomes feisty and sticks up for himself. You cannot help but to fall in love with both of these characters. I wanted to shake both of them several times until their teeth rattled, but that is normal occurrence with Carol Lynne’s characters.

We get to see many of our favorite characters from the series, and then we see a few of our not-so-favorites, who create havoc. Tragedy strikes the duo and Cattle Valley does what they do best—rally around their own for support. This is a great addition to the series, and I cannot wait until the next one! You will not be disappointed. Enjoy.