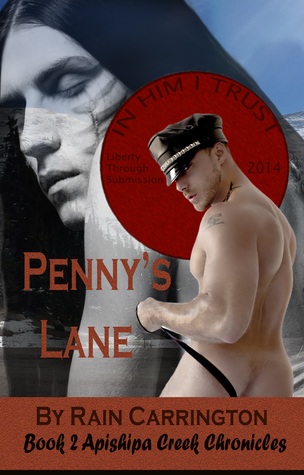 Blurb: Brokenhearted and lost, Lonnie begins to search for something to replace the long held love of a man who is in love with another. His search takes him on a dangerous slope with alcohol once more but there to pick him up and dust him off if an unlikely hero.

As his life begins to turn around he finds real love and his dreams are all starting to come true, including a dream he didn’t know he had. To be a man’s submissive. While he discovers new desires and feelings that are more intense and encompassing than ever, he finds the road to his dreams isn’t an easy one.

More explosive than Rebel Yells, Penny’s Lane will take you on a ride that will leave you breathless with hot love, evil vengeance and deepening friendships.

Review: In the first book of this series, Rebel Yells, we got to know Lonnie Lane pretty well. We saw him struggle with not only a terrible case of unrequited love, but he also struggled with an alcohol problem. Luckily for Lonnie he has some pretty great friends and family standing behind him. Even though Jack will never be his lover or Dom, he will always be a great friend. And whether Lonnie realizes it or not, that is a true blessing.

We were also introduced to Travis in the first book. Unfortunately, it was not Travis at his best that we got to see. Not only was Travis living in his own little pathway to Narnia, but he was a real jerk to anyone who threatened to change his closeted status.

In this, Penny’s Lane, the second book in the Apishipa Creek Chronicles, Rain Carrington takes us through the ups and downs of Lonnie and Travis’s fledgling relationship, and it was a wonderful journey to watch.

Once Travis decides to come out, he realizes that he knows very little about having a real relationship. Once he decides to start dating, he heads to the closest bar and makes a really great friend. He hasn’t found anyone he is interested in yet, but when he runs into Lonnie Lane, he realizes he can imagine more with this man. He’s still scared to come out, though.

Lonnie doesn’t know if he is ready for a real relationship, but he knows he has to move on from his juvenile crush on Jack. His first attempt at moving on is a comedy of errors, but it leads to Lonnie getting a date with a nice, successful man. When he crosses paths with Travis again, he has a strange request for the man. When Travis gives in to the request, it sets the two men on a path that leads to much more than they ever expected.

As the two men explore their newly discovered lifestyle together, they form a tight bond that neither of them saw coming. They will have to overcome some unexpected obstacles and get out of their own way if they want to find their HEA.

I have to say that this book has me torn directly down the middle. The largest portion of the story focused on Lonnie and Travis, and that part of the book was wonderful. I loved their character development, their relationship development and their overall storyline. If the book was only about these two men, it would have been a five star read. I gave the book a three star review, however, because I feel as if Jack and Rebel had way too much page time in this story. Don’t get me wrong, it was great to see them again, and with a town the size of theirs I know they will be making frequent appearances, but when the author includes a couple from the previous book in the sequel I think it’s important to be aware of continuity issues. A very important scene from the first book was rewritten in a completely different setting and manner in the second book, and this took me so far out of the story I almost didn’t finish Penny’s Lane. I’m glad I picked it back up because the book ended well, and I loved Travis and Lonnie’s story. I still love the first book in this series, but the second left me feeling a little let down with this one major flaw.

I am looking forward to the next book in the series, and I would highly recommend both books.