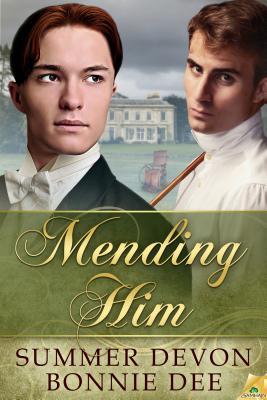 Blurb: “As his world collapses, love opens his heart.”

Robbie Grayson has always felt like a bit of an outsider in the Chester family, though he’s related by blood. An orphan taken in at a young age, he is further set apart by a limp inflicted by a childhood illness.

Nevertheless, he’s content enough with his quiet country life—until a mercurial wastrel named Charles Worthington explodes into it. And Robbie is assigned to play nursemaid to an invalid with an attitude.

Injured in a carriage accident, Charles arrives at the Chester estate drunk as a lord and with empty pockets. Despair consumes him as his broken body slowly heals, but the kindness of quiet, thoughtful Robbie saves him from drowning in self-pity.

Over chess matches and conversation, these polar opposites challenge each other to break out of old patterns, until desire burns through the thin veneer of pure friendship. Yet their passion could destroy the family bonds they value so highly. Especially when someone catches wind of their relationship—and threatens blackmail.

Review: I’ve read a good number of Devon and Dee’s books, and it’s quite safe to say that Mending Him, as far as I’m concerned, is their best offering yet.

One of the problems I’ve had with some of their previous releases is what I feel to be the lack of chemistry between lovers. The Gentleman’s Keeper is my most recently read book of theirs that, unfortunately, suffers from this issue, and it took me quite a bit of energy to find a convincing enough connection between the heroes beyond pure lust. In the end, I still came up short and found the book to be unsatisfactory as a romance. Mending Him, however, not only reassures me of the emotional bond between Robbie and Charles, it does so with a surprising amount of subtlety. This book is, by far, Devon and Dee’s most nuanced work. It doesn’t shy away from a rich palette of gray shades, no matter which character happens to be the focal point of a given scene. It’s a quiet exploration of the complexity of human nature, especially when bound and suppressed by 19th century laws.

Servants aside, every character in this book inspires some level of sympathy, anger, dismay, and appreciation. Yes, even the person behind the blackmail, who’s actually forced to turn to drastic measures and threaten Robbie and Charles with ruin. One can say he (the culprit) is a fool, but that would be oversimplifying the issue; his selfishness is the result of too many things, many of which happen to be beyond his control, from his birth to the present. One can’t help but feel a little sorry for him in the end, especially in the climactic scene during the harvest ball. On that note, one also can’t help but feel torn toward Phillip and his obviously heartbroken reactions to so many disappointments involving his family. Even Lenore, who’s a bit of a flighty but loving woman, shows a remarkable side of hers that I never expected – a strength and a wisdom that appear at the most opportune moment and are, sadly, mostly suppressed because of her role and her gender.

Charles and Robbie aren’t perfect, either, and it’s absolutely refreshing, seeing different aspects of their personalities explored beyond the romantic connection they have. I’d like to add that even their sexual encounters are few, and those scenes are wonderfully free of clichés as well. Robbie and Charles’ first intimate moment happens outdoors, on a cart, for heaven’s sake, with both of them inebriated in varying degrees, but the authors have taken care to balance the sex with dialogue that shows a surprising level of vulnerability in both men that caught me off-guard and, in the end, moved me quite a bit. The same can be said about their future encounters, but that’s not the extent of this book’s emotional nuance.

The changes both heroes undergo – for Robbie, an exposure to life outside his cloistered existence, and for Charles, an ongoing lesson in humility and resilience – aren’t earth-shattering in scope and intensity, but they’re shown to be significant enough to convince me that the decisions the men make about their future together make a damned lot of sense. Even the harvest ball scene, during which Charles and Robbie are forced to be gallant to a pair of spinster sisters, could’ve easily been a throwaway moment. But the authors have taken care to use it to wonderful effect, and if you read that scene, you’ll understand why I admit to being moved almost to tears by it.

There’s no emotional wallowing in this book, which can be the downfall of historical gay romances, given the outlaw nature of same-sex relationships. Part of the book’s strength lies in the authors’ masterful use of restraint in laying out the complications and the triumphs not only of the lovers, but also of the Chester family, whose loving relationship with the two men shapes painful choices they all make along the way. The resolution to the problem of gay lovers in the 19th century is also plausible; modern readers might grieve over the lack of an out and proud relationship, but in their practical and emotionally rewarding way, Robbie and Charles prove to us that men in their position can carve out a happy life together, regardless of society and, especially, family. There’s defiance tempered by prudence and vice-versa, and one can’t ask for anything more.

You can Pre-order Mending Him here: