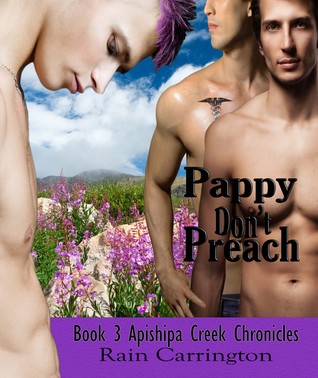 They say opposites attract but in the case of a preacher and a man of science, things get downright incendiary. Mark (Pappy) Rafferty is an ex priest recently moved to Apishipa Creek to start his own church in the beauty of the Rockies. Nathan Lee is the smooth talking Atheist doctor of the town’s clinic. They start jogging together every morning for safety but their hearts become in peril from one another.

Dayton Binx is a submissive actively searching for a Dom. Travis Walton feels a kinship to the younger man because of their similar backgrounds but soon passes the pain in the neck off to Pappy. Pappy, who believes nothing can come of the overwhelming attraction he feels for the doctor, takes the sub on and begins to fall in love with him. A slip of long awaited passion between he and Nathan threatens to tear Pappy’s sub from him, but never underestimate a sub on a mission!

With more intrigue, suspense and hot action between sexy men, Apishipa Creek heats up once again as three men find an uncommon bond while two others are ripped apart because of stubborn pride. Can everyone live happily ever after or will those wishing revenge complete what they started and kill those who get in their way?

Excerpt: Pappy gulped in air as he stared at the man, his anger only waned enough that he didn’t pick Nathan up and toss him over the cliff. “What the fuck was that? Are you trying to give us both heart attacks?”

Nathan stood up straight and sneered at him as he replied, “Gotta keep you in shape for your new boy toy.”

It overwhelmed him then, the anger, the frustration at the man, the want and desire and Pappy pushed Nathan hard in the chest, knocking the man down into the weeds behind the lookout. “You could have had him! You could have had me! You stubborn fuck! If you had half a brain like you think you do you would have realized I wanted you! No! Your head was too far up your own ass to see what was right in front of you!”

Throughout Pappy’s tirade Nathan just stared up at him, dumbfounded, but the minute Pappy stopped he jumped back up to his feet and swung out his fist until it connected with Pappy’s chin, sending him stumbling back and to the side. “I do want you but you couldn’t wait! You had to run off and take that sub!”

Pappy could take a punch. He had plenty of brothers that raised him with getting pounded with fists. He was grabbing onto Nathan around the neck then the slick shale under their feet gave way and they tumbled, rolling down the side of the slope behind the benches of the lookout. Somehow, though, in the middle of their rolling their mouths connected and they started to kiss.

It wasn’t gentle or loving, it was a violent joining, ragged breath and teeth contributing more than lips and tongues. As they rolled to a stop their kissing got more urgent, their bodies tight together as they lay on their sides, rubbing and groping one another. Anger overtook them but the passion created was like an earthquake pushing up layers of earth from the core of the planet. Their cocks slid together through their running shorts, the friction almost burning their skin. Nathan’s hands were on his ass, pulling him in tighter, grunts and the smell of sweat and precum surrounding them.

Pappy pulled at Nathan’s short black hair, biting his lower lip as he felt his climax coming hard and fast. If the way Nathan was panting was any indication his was coming on too. Pappy pulled his face back just enough to watch the beautiful man who was looking right at him as long as they could before their eyes closed and they were spilling their loads into their underwear, the heat of Nathan’s warming Pappy as much as his own had. Nathan rolled over the top of him and kissed him again, calmer but with no less passion before he flipped back to the ground gasping for breath. Pappy laid watching the clouds roll in and hearing the man beside him breathe. Neither of them moved for a long time until finally Binx roared into his mind and he sat straight up as he said, “I should get home.”

Nathan got up slower and stood, brushing the dirt form his clothes. He helped Pappy up and brushed off his back, avoiding his ass. “Yeah. Listen…I’m sorry. This should have never happened.”
Pappy knew that to be true. He’d just cheated on Binx. They hadn’t set anything into their agreement about monogamy but it was implied. “No it shouldn’t have. I think we should both find other places to run.”

“Already planning on it.”

They didn’t speak again down the hill and they only looked at each other once more before they got into their cars. That look held all the things they wished to say, all the pain of their parting let out in a silent scream between them.

Pappy got home and went inside, passing through the kitchen without saying a word to Binx. He went into the bathroom and shut the door.

Binx looked down the hall and saw the closed door. This would be the first time in weeks he hadn’t been invited to take a shower with Pappy. Binx leaned against the arch and gnawed his cheek trying to think of anything he’d done to piss his Master off and couldn’t find anything. Pappy had been in a good mood when he’d left, kissing Binx goodbye for a long time.

Maybe he wasn’t feeling good. It looked like he had dried leaves in his hair. He could have fallen, hurt himself. If so then Binx should be in there, taking care of him. He waited right in the hall until Pappy was out of the bathroom and waited for Pappy to say something to him but his Dom just walked past him and went into the bedroom, again closing the door behind him. Binx waited for a few minutes then went to the door, turned the handle to find it unlocked. He opened it carefully only an inch or two, looked in and saw Pappy kneeling by the bed, hands clasped in front of him while still wrapped in a towel.

Author Bio: Carrington started writing when she was just a teenager in Trinidad, Colorado but didn’t start writing M/M romance until much later. Through the years many of her gay male friends told stories of heartache and the struggle to find “the one” so she told them stories, fantasies all about them and their future cowboy, fireman, biker or policeman. When she found a writing site that encouraged her to write them down she started what was an adventure like she never had before.

Her first story, Cabin fever, about a young man searching for love and finding it wrapped in a member of a mafia family gained her readers who cheered for more. She knew then that she had found her place in the world. To make stories of love and kink that not only her readers but she could get lost in as well.

Rain now lives in Colorado Springs, Colorado but has traveled most of the US. Her last road trip to San Francisco gave her characters still coming out…no pun intended…in her newer stories. Rain has severe scoliosis which makes it hard for her to do all the things she used to love but it did give her the time to write that she never had before. She fights for lgbt rights from her home as best she can now and keeps in close contact with her friends that fight on two good legs to point them where they should go. She is a fervent believer that one door never closes without another opening so there are no limits she can’t get past.

Of all the people in the world no one has encouraged and supported her like her friends, many of them writers themselves, and her family. There is never a dull moment in her home where laughter is in the air 24/7 and everyone knows to avoid the computer screen when she sits in front of it. They never know what kind of beautiful man love they may see. Rain calls it research, they call it, “there she goes again!”