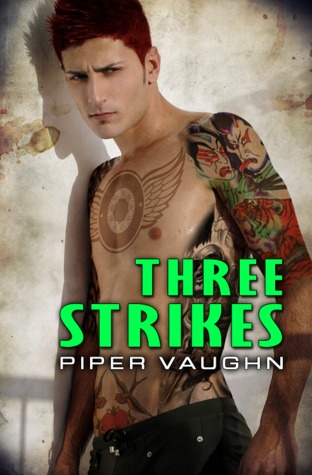 Blurb: Jeremy Saitou is on his third and final strike. His manager, Shawn, would love nothing more than to send him packing. Shawn hates everything about the guy, especially Jeremy’s insolent mouth. Sure, Jeremy is exactly Shawn’s type—hot, pierced, and tattooed—but no one else has ever annoyed Shawn more. So when Jeremy offers Shawn the use of his body in exchange for one last chance to save his job, Shawn immediately shuts him down, even as everything in him screams for him to say yes and finally put Jeremy in his place.

As a manager, Shawn can’t in good conscience accept Jeremy’s offer, but he does grant Jeremy the same chance he would any other employee—one last week to get his act together and prove his dedication to his job and the company.

The very last thing Shawn expects is for Jeremy to start pursuing him in the days that follow. Now it’s impossible to separate the lies from the truth. Is Jeremy really interested… or is he just doing everything in his power to make sure he still has a job at the end of the week?
(Originally published in the anthology Gay & Lesbian Coffee Break Quickies

Three Strikes is all about the quickie office interlude, but Shawn Cole isn’t about to fall into the trap of the sexual-harassment-lawsuit-waiting-to-happen that the tattooed and pierced bad boy, Jeremy, represents. Shawn’s not quite that easy, or stupid, especially when Jeremy offers himself up like the special menu item on the sexual favors buffet when it looks like he’ll soon be joining the ranks of the unemployed.

Some revelations, a second chance, one hot encounter and a few misunderstandings later, and Piper Vaughn has this one wrapped up in a spicy little morsel of a story that’s sure to heat up your e-reader.

Three Strikes is the very definition of instant word gratification, with the promise of maybe something just a little more between these two men in the end.