“All the art of living lies in a fine mingling of letting go and holding on.” – Henry Ellis 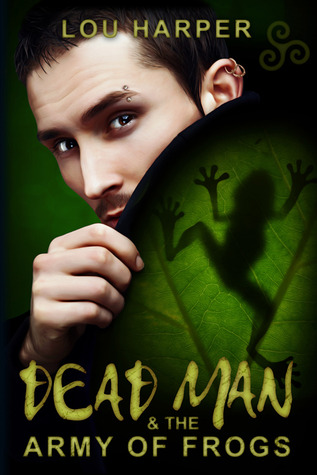 Dead Man and the Army of Frogs

Title: Dead Man and the Army of Frogs

Blurb: All Denton wanted was a few minions. He got frogs instead.

Web developer by day and necromancer by night, Denton Mills is used to seeing things nobody else can. When he starts hallucinating frogs, he simply assumes they have something to do with his boyfriend Bran’s obsession.

Bran Maurell is a witch, who in a youthful outburst, accidentally turned his then-lover, Peter, into a croaker. Bran has been trying ever since to reverse the spell. A fresh amphibian encounter only spurs him to double his efforts.

As if Peter’s ghost coming between them weren’t enough, Denton and Bran are forced to deal with several errant spirits stalking the citizens of Chicago. Between a French chef who refuses to admit he’s dead, and malevolent creatures bent on causing mayhem, jealousy may be the least of Denton’s problems.

Review: There is something so delightful about a series that continues to grow its characters with both wit and passion. When we last left Denton and Bran, they were just beginning their relationship. Bran, as reserved and seemingly reluctant as ever, is now in a near co-habitative state with the relentlessly silly and bumbling Denton. In this installment of the Dead Man series, Dead Man and the Army of Frogs, we are presented with a variety of demon banishings and much more interplay between our two MCs. We get to see a bit more of Joy, Denton’s business partner and best friend. All in all, this was another sweet encounter with two very quirky creations from the imaginative Lou Harper.

Set up in parts, this novel takes us through a “day in the life” of necromancer Denton Mills. Now in a relationship with witch and herbalist, Bran Maurell, the two take on various hauntings and demon possessions like old pros. However, all is not happy go lucky in the Mills/Maurell households. After finding out that a frog may have been the source of their client Lenny’s possession, Bran begins to hole up in his office, fixating on his former boyfriend, Peter. Fans will recall that Peter was the one who made fun of Bran’s most unique physical feature, and in his anger and hurt, Bran turned Peter into a frog. Now Bran is even more reticent and broody, and Denton is hallucinating, seeing frogs while both asleep and awake.

To both defuse the tension that is building between the two supernatural sleuths and give us another taste of that wonderful Lou Harper humor, a few chapters are dedicated to Joy and her less than stellar cooking. However, Joy has discovered an antique Dutch oven and purchased it to some amazing results. Not only can she now cook to perfection, but the oven is also possessed by the ghost of a former French chef. Joy is delighted and refuses to allow the boys to banish her ghost for the time being.

The rest of the novel is devoted to their moving through various cases and discovering that the wrong done to Peter must somehow be righted—even if it is at their own physical peril. The spell they must cast to fix the damage done could prove fatal to Denton. This book also marks that rocky period in a relationship where two people either grow into one another and accept each other’s flaws, or decide to throw in the towel and cut their losses. At times, that very idea seems to hang in the balance as both Denton and Bran deal with their own jealousies—Denton over Bran’s former boyfriend, Peter, and Bran over Denton’s relationship with Gabe.

All in all, this was another solid win by Lou Harper. This author just keeps getting better and better. Her stories are sharp and concise, well written, and teeming with humor and drama. Dead Man and the Army of Frogs is a winner in my book!

You can buy Dead Man and the Army of Frogs here:

Dead Man and the Army of Frogs