“The core of your true self is never lost. Let go of all the pretending and the becoming you’ve done just to belong. Curl up with your rawness and come home. You don’t have to find yourself; you just have tolet yourself in.” – D. Antoinette Foy 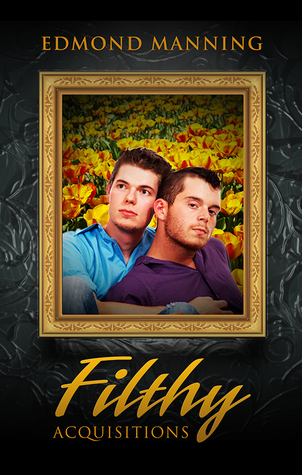 He would quit if he weren’t completely impoverished, but with no life skills and no ways to generate income, Keldon has no options.

However, Acquisition Number Five proves to be more challenging than expected. Wheel-chair bound Irene Woullet and her handsome nurse caretaker, Joshua Greene, refuse to cooperate. Keldon’s only chance is to seduce the old-fashioned, simple-living Josh in the hopes that Joshua can persuade Irene. But Keldon has to work fast—he has only two dates to win Josh’s affection.

With love’s potential in bloom, how can Keldon live with his own worsening conscience as he gathers these filthy acquisitions?

Review: “You go through life, and disappointments come your way. Death. Dreams that never come true. You acquire a little filth. You lose a little of your dreams. You get obsessed with money or status, or a raise. Filthy acquisitions.”

Keldon Thurman has acquired quite a heaping of filth over the years. Young yet beaten down and wounded in many ways, he now pursues the artistic remnants of a horrific murderer who continues to prey upon the innocent even beyond the grave. Serial murderer James Merrick produced some fifteen pieces of “art” that Keldon now retrieves for the elusive Mrs. Maggiarra. For Keldon it is another “performance”. A way to make money so that perhaps one day he can pursue college again, build something of his life that up until this point has been one form of whoring or another. At least this is how he feels, for you see, poor Keldon Thurman has acquired so much filth in his life that it has mired him to the point where he can no longer see his own self-worth. Until the fifth acquisition…then things change, and Keldon is forced to meet some of his past demons head on and by doing so, shake off some of the guilt he has mistakenly held on to for so many years.

Edmond Manning’s story, Filthy Acquisitions, is an act of forgiveness written in the guise of a sweet, innocuous story. When Keldon comes face to face with someone he really wants to be worthy of, his past roils up within him, forcing him to look closely at not only how he normally becomes a chameleon, taking on any and all characteristics to please his lover, but that he has stooped to doing a job so heinous he can barely stomach it.

Joshua Greene embodies everything that Keldon feels he is not, someone who has abandoned the rat race of corporate life to pursue his own desires; simple, back to earth, and fulfilling. As part of the attempt to acquire the fifth piece of art, Keldon agrees to two dates with Josh and is stunned to realize that he does not have to be fake or clever, but rather he can simply be himself, flaws and all. So when Joshua and Irene, the elderly woman Joshua cares for as her daytime nurse, discover exactly what the picture Keldon is after stands for, they are quick to dismiss him from their lives. Keldon feels that rejection like a physical blow and his immediate response is to use it as an affirmation of all that he believes about himself, including his unworthiness to have nice things, a stable life, a loving partner.

Filthy Acquisitions takes aim at the feelings of longing and self-doubt within us all and exposes them to the light. But this is not a harsh, condemning illumination; rather, it is the softer glow of forgiveness and its residual warmth. Through a clever little story, Edmond Manning speaks to that place inside us that has acquired that little bit of filth, and assures us that those who love us can look beneath it and see who we really are and, in doing so, help us free ourselves from being shackled to guilt over past mistakes. It is a story that says we must learn to love ourselves for there is so much within each of us that is worthy to be loved. I highly recommend it to you.

You can buy Filthy Acquisitions here: