“Our reputations weren’t who we really were, they were who people told us we were. Some of us fell into that trap, while others fought their entire lives to break free of them.” ― Nicole Williams 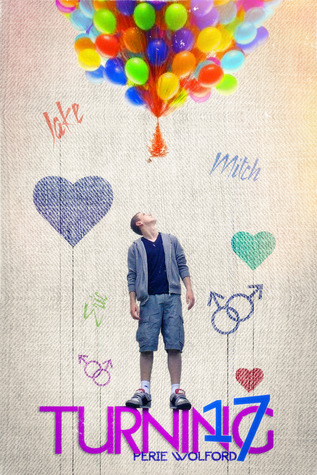 Blurb: Sam is turning 17 this year and he is being pushed towards adulthood too fast. He has a whole bunch of grown-up problems on his hands now. Like how to make a distant relationship with your boyfriend work? Or how to stop yourself from cheating on your boyfriend with a hot friend who wants to be more than friends? Or how to disattach yourself from your parents and follow your dreams independently? But all that is just too much for a seventeen-year-old to handle. So Sam finds himself gravitating towards Eric, a little daredevil who introduces him to fun things, like stealing, lying, drinking, smoking, and having sex.

But we know that things like that can lead you into trouble. Sam doesn’t know about that though, and he is headed towards a disaster. Somebody is just gonna have to show him the right way.

Review: Poor Sam. And poor me. I was reading along, loving every minute of Perie Wolford’s Turning 17, and suddenly it was over! And I wanted more. This is the sequel to Turning 16, in which Sam, you guessed it, turned 16. That book was very loosely based on the John Hughes films of the 1980s. In Turning 17, Perie pays homage to Dirty Dancing.

Sam has a birthday curse. Whenever someone wishes him a Happy Birthday, something terrible happens to him. While serving on the wait staff at a summer resort less than an hour from his home, the thing that goes wrong most frequently is that dishes and glasses get broken. Many of them.

Since his last birthday, Sam’s boyfriend has moved to Boston, and they speak on the phone daily, but it is hard to keep their relationship going. And Jake is always there, it seems. Jake, Sam’s crush from forever. He knows Jake flirts with him sometimes, and he also knows that Jake won’t come out and risk the support of his family and the wrath of his football teammates.

Sam’s birthday weekend is spent working at the resort. His cousin is getting married there, and there is a dance contest as well. All on the same weekend. Sam and his BFF Melissa really need to win the dance contests because they need the (unrealistically high amount of) prize money to help pay for college. Of course, because it’s Sam’s birthday that all falls apart. He never mastered the lift anyway.

Jake turns up for the weekend, and Eric, one of the other servers, makes it clear that he is gay and interested in Sam. What’s a fairly innocent young man to do when faced with temptation everywhere he turns? Jump in, of course. Eric introduces Sam to drinking, smoking, lying, stealing, and what to do with someone else’s erection! Jake decides to help Sam learn the dance routine. Young, virile bodies pressed together like that? Bound to be trouble. No wonder Sam hasn’t been able to tell Mitch that he loves him.

Sam has a boyfriend who loves him. He has a crush who, from all indications, likes him back. He has a friend/partner in crime leading him down the road to the life of a petty criminal. He has a BFF who is mad at him. He has parents who will pay for college only if he goes to one and majors in something of which they approve. So much to deal with. Sam deals with it all so well. With a sense of humor and a clear knowledge of who he is and an almost clear knowledge of what he wants. He knows where he wants to go, he just has to figure out how he’s going to get there and who will be at his side when he does.

I just love Sam, and everyone around him, but Sam. Wow. Mr. Wolford could pay homage to The Shining next and have Sam murder his family, and I would still love him. He is every teen. Gay, straight, bi, trans, cis, male or female. All teens struggle with the same questions and insecurities that Sam does. They are all faced with choices that seem life altering at the time. Everything is just so much more for teenagers. Perie Wolford captures that in this lovely series. These stories are a treat to read. I can’t wait to read about Sam’s birthday next year. At college. Free from adult supervision. Take the opportunity to get caught up before then. Read Turning 16 and Turning 17 before Turning 18 comes out in October. You won’t regret it.

You can buy Turning 17 here: