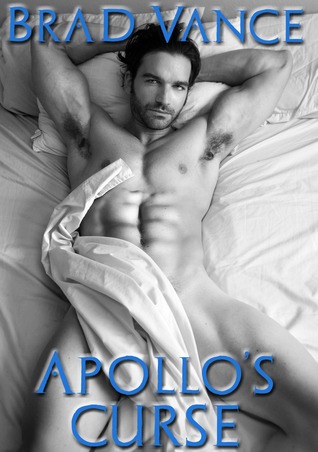 Dane soon finds himself obsessed with Paul Musegetes, a popular but secretive cover model. Then he meets Paul at the Romance Writers’ Ball on the Summer Solstice, and they connect for one night of passion.

After that night, Dane’s a writing machine, and every story he touches turns to gold. But he can’t write anything but romances – one after another after another…

And this Midas touch has a heavy price. After the next Summer Solstice, he’ll never write again. Nothing. Not even a grocery list. That gives him no choice but to find Paul, and break the curse. To do that, he’ll have to track down Paul’s equally mysterious photographer, Jackson da Vinci…

Review: Apollo’s Curse is a light-hearted poke in the ribs of art, romance, and real life — a book that can be appreciated rather wryly by authors who’ve found themselves caught in the same infuriating crossroads Dane finds himself in. The problem of creating art and living off it is an issue that dogs our hero, a writer who’s absolutely passionate about his dreams and works extremely hard to fulfill them. Unfortunately, mainstream tastes don’t necessarily align with what he considers to be serious art, and this is something we constantly see not only in publishing, but in general entertainment as well (see: the inexplicable success of Michael Bay movies).

Loneliness (with a generous dollop of lust) forces a vulnerable Dane into making a rather foggy, Faustian deal with Paul (Apollo), and as the saying goes, be careful what you wish for.

“Pandering to the lowest common denominator” is a prickly cosmic law that inevitably convinces Dane to experiment with friends and “lower” himself to writing heterosexual romances – complete with clichés up the wazoo, not to mention pen names that make my kidneys shrivel. I admit to sniggering my way through those early chapters involving his and his friends’ attempts at cobbling together romances under a pen name. Dane might at first turn a few readers off with his patronizing attitude toward romance, but the plot gradually unfolds, revealing more layers to his character than what’s pretty obvious.

In fact, the book itself is almost sneaky in the way it presents a complex story. At first glance, my conclusion was that Dane simply needed to choose which course is best for him: success as an artist or for him to become the man who’s able to live his life to the fullest by allowing himself to love and be loved back. In fact, it’s a choice that’s constantly posed to him, whether overtly or otherwise. But the more I sat back and reflected on what I’ve read, the more I noticed other little issues popping up here and there. Like the nature of art — what is it, really? How about success? How would one define it? Are art and life mutually exclusive? How about art and monetary success? Would writing something that “panders to the lowest common denominator” in order to supplement an artist’s true calling be an acceptable compromise?

In the end, there were a lot of questions raised — at least in me — and for that, I ended up appreciating this book even more. I like stories that raise questions but not necessarily answers them. I don’t want to have my own conclusions dictated to me and am not particularly keen on too much predictability. I want to ponder and analyze, think about what I’ve just read even well after I’m done with it. In that regard, Brad Vance’s novel succeeds, whether or not those questions I’ve raised were part of the author’s purpose.

The plot moves at a pretty casual pace — maybe a tad slow for some readers, but I like the summer-like idleness of the way the story unfolded. The characters, including the side ones, are nicely developed, though perhaps the one who suffers the most fogginess is Jackson. Yes, we know about his background and so on, but his relationship with Paul as the latter’s personal photographer remains somewhat murky. Unless I missed something along the way, I was left with a hint, based on a brief conversation between Jackson and Paul in the end, regarding another Faustian deal made between the two prior to Dane’s experience with Paul. Of course, I’m teetering on the edge of spoilers here, so that’s all I’m able to share. I’m not sure if what I got was what Vance intended, but suffice it to say, Jackson’s side of the story left me a little dissatisfied by the book’s end.

There are fantasy elements in this book, which was why I requested it for review. But they’re presented to us almost allegorically, with no overtly mythological figures strutting around, using their powers. Those familiar names in Greek mythology are there, though, and I fondly refer to them as mortal-immortals, and they play a pretty significant role in opening Dane’s eyes to what he really needs. Dane might find the answers to his questions in an infuriatingly roundabout way, but like all those great adventures from legend and myth, the hero here is forced to figure things out on his own. And not only that — he’s also forced to face so many truths about himself in order to find the courage to make that final choice and take that fateful step forward.

Perhaps the only issues that bogged things down for me are the info-dumping and the name-dropping that’re quite liberally sprinkled throughout the book. The process of self-publishing, for instance, or the descriptions of Venetian streets, campi, etc., could’ve used a bit of pruning. The constant ID-ing of book titles, authors, or even other details such as wine labels is useful in grounding the story in the present, but for me, anyway, too much of that can also tear me out of the book. After a certain point, it almost becomes a laundry list of real-life things the author knows and has worked into the book. A subtler handling of those details would’ve been more effective in maintaining a good balance of escapism and realism.

In the end, I really enjoyed this book. Though I found that I had to sit on it for a few days to mull over things before writing this review, I still appreciated Vance’s good-natured take on art. It only goes to show that humor shouldn’t be dismissed as frivolous and can, in fact, be used to pose questions that leave us either enlightened or mystified, our reading experience all the richer for it. Yes, even when it’s “only” a romance, as viewed through Dane’s jaundiced eyes.

You can buy Apollo’s Curse here: