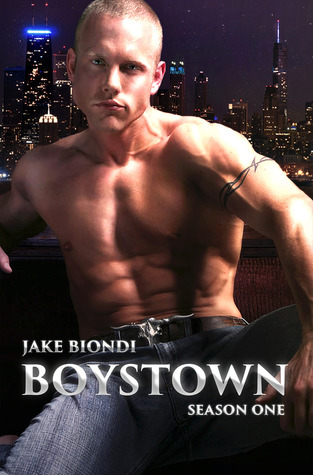 Blurb: One of the most diverse and lively neighborhoods in the country, Chicago’s BOYSTOWN has something for everyone. So it’s no wonder that Jesse Morgan and Cole O’Brien chose to live there upon graduating from college. Ready go begin the next phase of their lives in an exciting new city, Jesse and Cole quickly find themselves at the center of a new group of friends.

Joyelle and Derek Mancini have been happily married for years, but Derek is harboring a secret that could tear them apart. Derek’s brother Emmett is about to discover that his boyfriend Keith Colgan has a past that will haunt them both. Long time couple Logan Pryce and Max Taylor must face a crisis that neither of them expected. And, before they realize it, Jesse and Cole find themselves at the center of it all in the adult playground known as BOYSTOWN.

Review: In Boystown: Season One, author Jake Biondi has done what so few have dared to do with such calculated intent: translated the television soap opera to print. This novel is filled with all the campy melodrama I used to love back in my General Hospital shipping days, the sort of drama that forces you to suspend all disbelief and lose yourself in the crazy. Take all of the affairs and breakups and sinister schemes and unlikely scenarios and insta-loves and stalkers and would-be killers; add all other manner of dysfunctional issues soaps are famous for; roll them into a single book, and that’s Boystown in its condensed form. Now all that needs to happen is for someone to come back from the dead in Season Two, and life will be complete.

Just as you’d expect from a soap opera, the ensemble cast in this novel each has their own story running concurrently, primarily relationship drama, which accounts for the rapid-fire scene changes that come at a manic pace. The challenge at the outset of this novel is in keeping everyone straight–who’s with whom–as the role players are all introduced and lumped together at the beginning of the book. The blanket intros came at the expense of focusing on the plot and trying to remember who was who, but all was eventually untangled and once it was, I was ready to see where the author was going to go with the down and dirty. Noting the size of the cast and the concurring storylines, one of the sacrifices I did feel was made was in character and relationship development. It was sketchy, at best, for the sake of including as much turmoil as possible in these people’s lives—the “I love yous” are thrown around at will, with no real serious intent to them—and I didn’t find myself warming up to any one couple in a meaningful way, although the Derek/Cole storyline holds potential. It’s a veritable gold mine of drama.

The aforementioned scene changes in Boystown weren’t always accomplished as skillfully as I felt they might have been. “At the same time…” began to take on a “Meanwhile, back at the ranch…” feel for me, not to mention taking some getting used to. It’s a unique delivery, to be sure, maybe a little risky. The author is playing director and is plotting out his script in a deliberate way. Where this worked in some respects, keeping the story set at a brisk flow, in others the delivery wasn’t as engaging as I felt it could have been. There are scenes in this novel that feel more like a laundry list of what’s playing out rather than there being a fluent narrative delivery. The “this happened, then this happened, then this happened” writing style was especially noticeable during sex scenes, which made it difficult to become grounded in the story.

Though I do feel Boystown: Season One suffers a bit from the ills of the unedited self-published novel (or, at least not professionally edited, from what I could tell), it’s still a fun book to give yourself permission to indulge in. It begs the reader not to take things too literally or ask too many questions to try to rationalize and make sense of certain situations introduced in the plot. Once I allowed myself to give in to all the seedy and salacious goings on rather than focusing on my nagging little qualms, I couldn’t help but like this book, flaws and all, all the way to its “Who shot J.R.?” style cliffhanger of an ending.

If you love a novel that’s over-the-top in only the best ways, I’d recommend giving this one a try. I’m ready to jump headlong into Boystown: Season Two, and can say, with all honesty, I’m looking forward to it like Joan Collins, Linda Evans, and a good catfight.

You can buy Boystown: Season One here:

2 thoughts on “Prepare For A Drama Fix In Jake Biondi’s “Boystown: Season One””