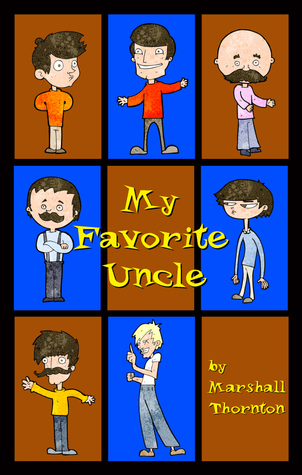 When his super Christian eighteen year-old nephew Carter shows up unexpectedly on his doorstep and announces that he’s gay, Martin’s first impulse is to send him back to his parents. But when he discovers that Carter has been in a mental hospital to cure his gay-ness, he realizes he’s stuck with the boy. Unfortunately, the two get on each other’s nerves, each driving the other to distraction. Independently, they each arrive at the same conclusion. The other would be much less annoying if he only had…a boyfriend.

Review: Although, I have grown quite fond of what I’ve read so far by Marshall Thornton, My Favorite Uncle isn’t usually something I read because of the religious reference in the above blurb. I wasn’t sure what I was about to read, but hey, so far I haven’t been disappointed by this author. It’s always an adventure when you can throw caution to the wind and just…go for it.

Expecting to read the usual conflict that involves religion, this book turned out to be a an exploration of Carter’s coming out. In fact, for me, Carter made this a fun and humorous read! As for Uncle Martin, he needed someone like Carter to perk up his dull existence. I especially enjoyed the part where Carter used his Uncle’s debit card without his knowledge to visit a porn site. Welcome to my world of raising four teenagers, Mr. Martin Dixon! Glad to read that I wasn’t the only one who had been zapped with a bill like that. Strangely enough, though, I kind of related to Carter’s antics and why he wanted to spread his wings.

As for Martin, I had a little trouble liking him. The man was a bit of a boor, and I’m guessing it’s because of what an ex did to him years ago, but it was definitely time to get over it and move on. There were things that were happening with Martin, relationship wise, that I just couldn’t fathom him considering. Unfortunately it was about this time, that I felt the story started to drag. I really could have done without the age gap issues and the ex showing up. Although, I did like what Martin had to say to Carter’s father when he met him at the airport and yes, Martin’s reaction was very understandable when he found out about the debit charge.

So, I’m giving a 4 Star rating to My Favorite Uncle. I would recommend this to anyone who likes humor in their stories. I only wish the story had stuck with Carter and his Uncle Martin getting to know each other rather than wandering off on the boyfriend stuff.

You can buy My Favorite Uncle here: