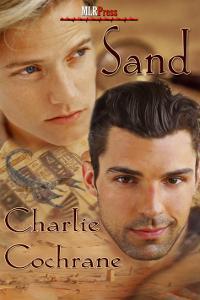 Blurb: Andrew Parks has come to Syria to escape potential disgrace in Edwardian England, burying past heartache and scandal among the tombs. Charles Cusiter has travelled here more reluctantly, as chaperone to a friend whose fondness for the opposite sex gets him into too much trouble at home. Out in the desert there aren’t any women to turn Bernard’s head — just the ubiquitous sand.

The desert works its magic on Charles, softening his heart. Not even a potentially fatal scorpion sting can overcome the power this strange land exerts.

Review: Those of you familiar with Charlie Cochrane’s backlist will undoubtedly perk up when I mention her Cambridge Fellows Mystery series. Smart, elegant, witty, and quintessentially British, those books have always been my personal benchmark when it comes to historical gay fiction / romance. I haven’t read anything else from her since Lessons for Suspicious Minds and am only now trying to make up for lost time with Sand – and it appears I’m way behind on her catalogue.

Sand is a novelette, written in a style that’s quite different from what I’m used to seeing in Cochrane’s Cambridge Fellows series. At around 13,000 words long, the story is more about beginnings than anything else. Not that it’s a bad thing, mind you, but if you’re expecting a rich exploration of gay relationships in a different era from ours, you won’t find it here. That said, Sand is still a beautifully written and surprisingly melancholy story about two men who find love in the most unexpected place.

Don’t let “melancholy” put you off. That’s really more in reference to the loneliness our two heroes feel – the usual isolation from the rest of society, made all the more potent when Charles’ need for love is juxtaposed with Bernard’s out-and-out clueless, reckless, and never-ending attachments to women. While the former is painfully suppressed to avoid prosecution (and persecution), the latter is not only tolerated and accepted, but also cynically used for monetary gain and several steps up the social ladder.

The growing closeness between Andrew and Charles is subtly handled, and there are quite a number of unspoken moments throughout the story. In typical Charlie Cochrane manner, those unspoken moments enrich the plot because they allow the reader to make those connections him/herself, which only add to a deeper appreciation of the story. The turning point of their closeness, however, is a bit of a cliché in the sense that a life-or-death situation is what inevitably forces them to confront truths more quickly and move forward with what they now have. I wish, I admit, that a different catalyst were used instead because this particular trope diminishes the quality of the story somewhat. Not much, but it still does.

Finally, there’s a certain elegiac undercurrent to Sand – it might just be me, and I’m waxing philosophical here, but because of the truncated length, the yearning and loneliness, as well as the quiet hope for a happy future together, seem to be magnified. There’s no easy, clever banter going back and forth a la Jonty and Orlando; there are only quiet admissions and growing love expressed in fleeting touches. And because this novelette is about beginnings, it does leave me wishing for more. Then again, I suppose Jonty and Orlando have spoiled me rotten – though I’m not complaining.

You can buy Sand here: