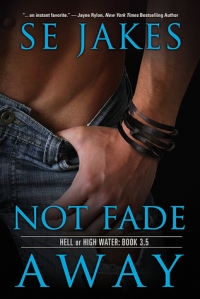 Not Fade Away (Hell or High Water)

Ever since superspy Cillian moved into Prophet’s building, their game of Steal the Couch has been funny to Prophet, but a thorn in Tom’s side. Then Prophet gets bored one night during an ice storm and insists on playing another simple game with Tom: Truth or Dare. In exchange for one of Prophet’s truths, Tom steals the couch one last time.

But Prophet’s truths are never easy—Tom should know that by now—and this one raises questions neither of them quite know how to answer. In response, Tom finds himself laying claim to Prophet in the most basic way he knows how. And also finds that he doesn’t mind it in the least when Prophet returns the favor.

This novelette is set between book 3 and book 4 in the Hell or High Water series.

Excerpt: Prophet’s cock was also a complete traitor . . . and a slut for the tattooed, pierced, handsome-as-fuck Cajun-drawling man in front of him.

Tom was breathing hard, but it honestly didn’t look like half carrying the goddamned couch up the stairs had caused him any strain.

Granted, it never had to Prophet either, but he hired movers to do it each time. Pay someone enough, and they didn’t ask questions.

Then again, the movers didn’t take their shirts off the way Tom was doing now . . . or look like Tom.

Tom unbuttoned his jeans, unzipped them a bit and left them hanging open enough for Prophet to note the lack of underwear. “Nice,” he managed. “You can keep going.”

Fine. Two could—and would—play at this game. Prophet took his shirt off, flinging it to the floor with a flourish, and then unbuttoned his jeans. Left them the way Tom had his. Because he could tease just as well. Better, even.

But Tom’s next words held more than an edge of warning. “I’ll throw you over my shoulder and bring you here if I have to.” Even though they were only maybe twenty-feet apart, Tom would do it too. And Prophet might want to let him.

But hell, he wasn’t going to let Tommy know that, so he walked toward him like he was bored of the entire thing. Even though he could—and most likely would—come if Tommy touched him.

Tom waited until he was right in front of him, then said, “No fucking way, Proph—you’re not coming until I say you are.”

Tom smiled, then reached down and unzipped Prophet’s jeans the rest of the way. Then he pushed them off Prophet’s hips while Prophet willed himself not to come.

“Step out of them,” Tom ordered, and Prophet did, kicking them to the side.

Tom appraised him in a most appreciative way that Prophet swore made his entire body blush.

“Turn around, Proph—hands on the cushions.”

Prophet swallowed. Okay, nearly swallowed his own tongue too, but managed, “Even if Cillian was watching, you know he turned the camera off on his end the second you told me to strip.”

Tom growled, low in his throat. “Yeah. And that was two seconds too long.”

“You’re going to make this couch suffer, aren’t you?”

About the Author: SE Jakes writes m/m romance. She believes in happy endings and fighting for what you want in both fiction and real life. She lives in New York with her family, and most days, she can be found happily writing (in bed). No really…

Other Books In the Hell or High Water Series: