“You were supposed to go to the Ball for a few hours and have some fun, not find a husband!” – Nikki Woolfolk 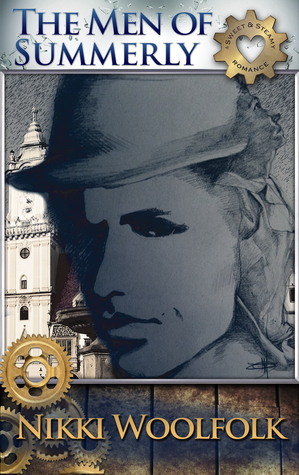 The Men of Summerly (A Sweet & Steamy series Book 2)

Blurb: Tradition is as quaint tradition does.

So thinks British trade envoy Simon Leatherby as he settles into his temporary home in the mountains of Stubborn, West Virginia, to negotiate an equitable export trade agreement. As the guest of honor at the annual Midsummer Night’s Dream Costume Ball, Simon is charmed by the beauty of this rugged country and matchmaking townsfolk, but only business is on his mind.

Ashland “Ash” Gottschalk, a sweet tempered glassblower, is caught up in a horrible set of circumstances, no thanks to an evil manager and his two wicked assistants heaping abuse on all the downtrodden workers of the Pantoufle Glass Factory. With a clever plan, borrowed items, and a touch of magic, Ash’s friends transform the kind cinderfella into a proper gentleman for one stolen evening at the ball.

A chance meeting at the celebration turns into a magical evening to remember as Ash and Simon meet their match. When the clock strikes midnight and the mysterious Ash disappears as suddenly as he appeared, Simon moves heaven and earth to seek out the keeper of the glass trinket left behind on that starry night.

Will Simon find his ‘prince’ before time runs out or will the evil management’s last cruel trick destroy his happy ending with Ash?

Review: Borrowing directly from the grand tradition of the fairy tale, author Nikki Woolfolk has written a thoroughly charming Cinderfella story set in a small West Virginia town that’s populated by some rather colorful characters… and one pampered porker.

With tongue firmly set in cheek, Ms. Woolfolk delivers handily on the sweet mentioned in this series title. This ebullient little tale is purely a confection of a romantical nature, in which our poor Ash is tormented by two men who take on the roles of Cinderella’s evil stepsisters at the glass blowing factory in which Ash’s talents are never in question, but his potential is squelched at every turn by his nemeses.

There are no pumpkins and mice turned into a coach and six in this fairy tale, nor is there a glass slipper or a fairy godfather, though there is a human one. No, this is, pure and simple, the story of two men who meet, part at the stroke of midnight, and find each other again to discover the key to their happily ever after.

Next time you’re looking for a sigh and a smile, The Men of Summerly is a good story to have on your TBR list.

You can buy The Men of Summerly (Sweet & Steamy Series: Book Two) here:

The Men of Summerly (A Sweet & Steamy series Book 2)

One thought on “Small Gems Sunday: “The Men of Summerly” by Nikki Woolfolk”