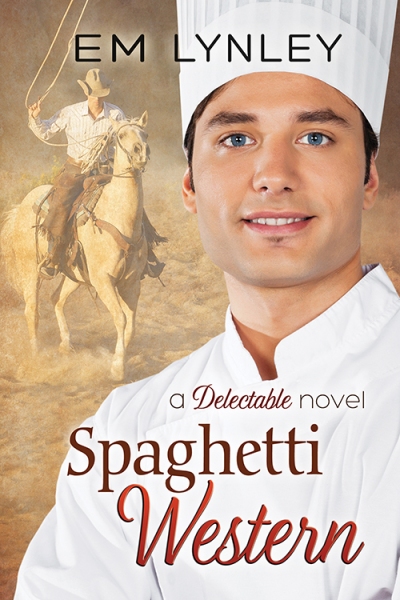 I’m thrilled to share the cover (and a recipe from the book!) and tell you about the latest installment in my Delectable Series, featuring men in the world of food and wine. It’s fun to pair up opposites and see where the rough edges will crop up—and how they try to smooth them over. So it was a real joy to set my chef Riley Emerson, fresh from several years of working in Paris, against Colby Zane, born-and-bred cattle rancher who didn’t know a patisserie from a potholder—till he met Riley.

The fun didn’t stop there, because I set the story on the Rocking Z Ranch in Colorado. I’ve only been to the state once and it left such an impression on me that I couldn’t wait to find a story that belonged there.

As the cook at the guest ranch, one of Riley’s duties is taking the antique chuck wagon out for an authentic trailside dinner for the guests, and events that occur during these dinners are some of the key scenes in the book. Not only is there some awesome food, but plenty of fun, drama, and maybe a few encounters hotter than a campfire!

One of the most enjoyable parts of the research was discovering chuck wagon lore. Chuck wagons were a huge part of the west for a short period of time. When ranchers had to move a lot of cattle very long distances, between the ranch and the grazing grounds, or to the sale lot, they were on the trail for days. The chuck wagon provided not only food, but carried their sleeping gear, and the cook (called Cookie) often provided medical and dental services. Ouch! I think I’d just live with the pain rather than let Cookie mess with my mouth.

There’s a lot of Western and cowboy lore surrounding the chuck wagon and the cook. Back when cowboys drove cattle hundreds or even thousands of miles to and from good grazing areas or to the sales location, the chuck wagon was an important part of trail life.

The cook had one of the toughest jobs. He had to be up before the cowboys so breakfast could be ready early enough for them to start their day, and he was still cleaning up when they were relaxing or snug in their bedrolls. He’d also have to prepare enough food at breakfast so the cowboys could take something along for their lunch.

But the chuck wagon cook also had the respect of every cowboy, and no one would dare complain if they didn’t like the chow. Well, if they did complain, they might not want to do it in front of the cook. With a supply of staples like coffee, flour, beans, molasses, potatoes, salt, dried fruit, and beef, the cook had to come up with enough variety to satisfy hungry cowboys day in and day out.

One thing every chuck wagon cook was sure to have was a Dutch oven: a heavy cast-iron pot on legs so it could be set over the coals in the fire. The pots got the name because originally they were obtained by Dutch traders who sold housewares. The Dutch oven’s lid had a special lip where the cook would place coals. This allowed him to replicate the heat dispersion of a regular oven: from below and above for more even cooking. A good chuck wagon cook could reproduce almost anything made in an oven at home.

Coffee was the key ingredient the cook would carry, but chuck wagon cooks were judged by their sourdough. They’d make biscuits, bread, even desserts with sourdough, and that meant they needed a sourdough starter and they would tend it as if it were a favorite child. I’ve got recipes in Spaghetti Western, including several using sourdough, and I even show how easy it is to make and use a starter.

If you’re intrigued, there are antique chuck wagons still working as catering events, chuck wagon suppers and historical reenactments. Visit the Chuck Wagon Registry for one near you.

Check out the beautiful cover by LC Chase, who found me a palomino just like the one Colby rides.

Blurb: Cordon-Blue trained pastry chef Riley Emerson arrives in Aspen, Colorado for a summer season at the best restaurant in town, only to discover his jerk of a boyfriend has dumped him, leaving his heart and his summer plans in tatters. Doubting himself and longing for a change of pace, he takes a low-paying position as chef at a guest ranch, the Rocking Z. The scenery is gorgeous, but he expects that nature up close and personal can’t hold a candle to his exciting Paris lifestyle.

But all’s not well at the Rocking Z. Unsurmountable financial problems force them to rely on a cash infusion from an outside investor, Fitz Wellington. Only Fitz is hot for Colby, and he won’t sign on the dotted line without some very personal incentives. The future of the ranch is at stake, and Colby’s just desperate enough to go along, but saving the Z might mean losing Riley.

After sourdough biscuits, hearty cornbread was a cowboy’s second favorite bread. My chef Riley Emerson put his own personal touch on this tradition by using blue cornmeal—it’s so pretty!—and kernels of corn mixed in. If you can’t find blue cornmeal, yellow works just fine, but try and find the blue—it’s available at Whole Foods and other stores with bulk bins.

Author Bio: EM Lynley writes gay erotic romance. She loves books where the hero gets the guy and the loving is 11 on a scale of 10. A Rainbow Award winner and EPIC finalist, EM has worked in high finance, high tech, and in the wine industry, though she’d rather be writing hot, romantic man-on-man action. She spent 10 years as an economist and financial analyst, including a year as a White House Staff Economist, but only because all the intern positions were filled. Tired of boring herself and others with dry business reports and articles, her creative muse is back and naughtier than ever. She has lived and worked in London, Tokyo and Washington, D.C., but the San Francisco Bay Area is home for now.

She is the author of Sex, Lies & Wedding Bells, the Precious Gems series from Dreamspinner Press, and the Rewriting History series starring a sexy jewel thief, among others.

18 thoughts on “Guest Post and Giveaway: Come And Get It! EM Lynley’s “Spaghetti Western” Is Coming Soon”