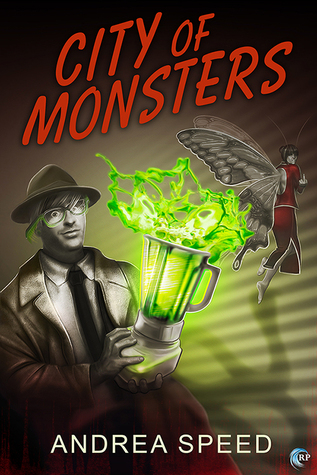 Blurb: Hunter is a human turned animal shifter in Nightshade, a literal city of monsters in a near-Earth dimension called Dev. All sorts of beasts reside here, unable to return to Earth, yet still plagued by the same jealousies, rivalries, and needs of any human. Resolving them is Hunter’s job.

Hunter faces supernatural perils at every turn: vampire debt collectors who most decidedly don’t sparkle, werewolfs who literally piss on everything you love, and surprise shifters. And just like back on Earth, there are mundane struggles too. Like paying the rent—which isn’t easy for a guy with more vices than virtues—and keeping his haunted blender happy with pricey produce. So he takes a job from a foul-mouthed reverse tooth fairy to find her missing twin.

Just when things seem like they couldn’t get any worse, Hunter meets Sakari, a hot newcomer to Nightshade with a taste for danger. Will Sakari change Hunter’s bad luck, or will he only mean more trouble? Can Sakari help him solve his case? And how will Hunter explain the new man in his life to his blender?

Review: Andrea Speed’s novella is a fun, quirky romp at 21,000 words. The highlight of this book is its humor. It’s breezy and totally unabashed, the kind of humor I like to see in my books. It’s also the kind of attitude I like to see in authors who attempt to write comedy: embrace the cockeyed sensibilities and celebrate them, never feel ashamed or guilty for indulging and show that embarrassment by toning down the silliness. The world can’t be drama and angst all the time, anyway, right?

Case in point: the gangster-like brawl between weres and vampires in front of a club. That’s easily my favorite scene in the book, and while it’s utterly ridiculous, it’s also insanely fun and funny. If anything, the scene (and even the novella, on the whole) almost reads like a satirical jab at shapeshifter and vampire tropes.

The book’s setting is great. It’s an alternate universe still linked to our world, the barrier between both a dangerously thin one and certainly not immune from criminal intent. There’s also a thin, invisible curtain of magic in our world that, through sheer accident, transforms unsuspecting mortals and sends them inevitably to Dev or more specifically, Nightshade. Once in Dev, they can’t go back – or, they can, but it’s definitely risky in the worst way possible (at least for the transformed human).

There’s so much material here to sink one’s teeth into. Or at least there’s so much that could be done with what’s there. I admit to reading this novella blindly. I don’t know if it’s a part of a continuing series or if it’s the beginning of one, and I’m frankly hoping that either is the case because as a standalone, it barely grazes the surface of a story. Or if it is a part of a series, it’d be nice to have that indicated somewhere in the book, I suppose, for those of us who haven’t had the pleasure of reading Speed’s backlist.

There’s really enough of a foundation for a full-length novel, but the word count severely restricts any kind of development that would’ve added to the enjoyment of the story.* Everything’s very lightly discussed, and a lot of material gets used up on the initial meeting of Hunter and Sakari. In fact, nothing really happens till around 70-80% of the book, when Hunter finally gets around to doing what he’s hired to do. And even then, the search for Larry becomes rather easy and convenient, with all that wrapped up in a very short amount of time. There are lots of juicy hints at trouble brewing in Nightshade, of course, but they’re not really pursued beyond an exposition here and there. And that’s essentially what got me thinking that this is the first of a (new) series from Speed. With so much material spent on the Sakari-Hunter lusty dynamics, everything else falls by the wayside and is left there.

At any rate, if you’re in the mood for something different, funny, and a very quick read, this is a good book for it. But don’t expect anything fully developed.

* This story is also a part of an anthology from Riptide, and maybe that’s the reason behind the restricted word count.

You can buy City of Monsters here: