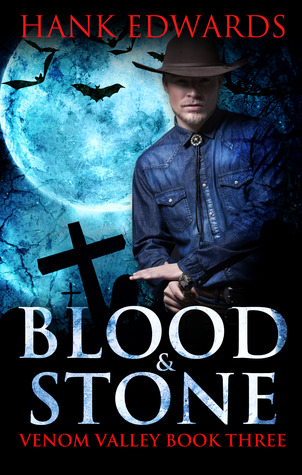 Blurb: Josh Stanton’s mother has been held prisoner by the vampire Balthazar for fifteen years. As Balthazar has turned the residents of Belkin’s Pass into vampires under his control, Josh, his lover Dex, former saloon girl Glory, and US Army Sergeant Walker Maxwell fight to contain the undead uprising.

As Josh struggles to control his power to raise the dead, the group is pursued to the abandoned Fort Emmerick. There they make plans to take the battle to Balthazar’s cave, uncertain if all of them will live to see the light of day once again.

Review: Vampires and Werewolves and Deaders… Oh my!

I’ve been such a huge fan of this series since Bounty (later renamed Cowboys & Vampires upon its re-release with Wilde City) was published back in 2011. Hank Edwards has taken the wild, wild West and populated it with the undead, the walking dead, werewolves, and all the danger, action, and suspense it takes to make a book nothing less than an old fashioned page-turner. Not to mention elevating Blood & Stone to the flawless diamond in this sparkling gem of a series.

The American West was never quite as untamed as the one that’s sprung forth from Hank Edwards’ imagination; nor has a mismatched group of heroes and heroines ever fought so valiantly against so unnatural an enemy, a deadly foe that surely would have left even Bram Stoker applauding. Or, quaking in his Victorian boots, one of the two. The series has come to a pinnacle in Blood & Stone, with no shortage of adrenaline pumping, contentious, breathtaking, and even a few heart-wrenching moments, and it was nothing short of a stellar performance on the part of the author.

The first two books in this series, the aforementioned Cowboys & Vampires, and its sequel Stakes & Spurs, are the TV Western turned inside out and strange brewed with one part Twilight Zone and one part Underworld. Blood & Stone has done nothing short of upping the stakes (no pun intended) and elevated this series to epic status. From its tightly plotted and engaging narrative to the characters themselves, who can now be named among some of my all-time favorites, this episode of the Venom Valley chronicles not only earns every one of its stars but has also earned a place as one of the best books I’ve read so far this years.

Josh Stanton and Dex Wells, our staunchly devoted romantic heroes, are feet to the proverbial fire in this book. Not only must they find and kill the most dangerous vampire ever to hit Venom Valley but they must do so while working against extraordinary odds. There is temptation to be found here, there is the cold, harsh reality that Dex is merely one bite away from becoming the undead against whom our heroes must do battle, and this provides an undercurrent of tension in Blood & Stone that does nothing but complement the danger these two men face.

A historical romance laced with horror, Native American mysticism, and paranormal fantasy—if you’re looking for something fun and out of the ordinary, the Venom Valley series may be exactly what you’re looking for.