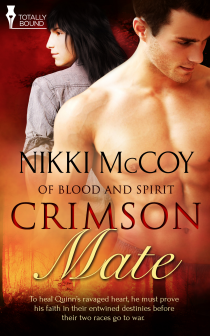 Blurb: A centuries-old feud has pitted Ba’Kal—shifters—against Vam’kir—vampires. Quinn has suffered the pain of the ongoing contention in ways that no man ever should. Once the respected son of the Vam’kir king, his life was forever altered the day his father realized a truth of which even Quinn was unaware.

As the Ba’Kal ruler, it is up to Manning to seek justice for the vicious attacks the Vam’kir have perpetrated against his kind, but his very beliefs are called into question when he discovers that his mate is also his enemy. To keep Quinn safe, he must learn to trust in the impossible—that love might exist beyond boundaries—for failure means the end of his future and that of the rest of his race.

Review: Crimson Mate follows Quinn and Manning. One comes from a the Vam’kir race and the other from the Ba’Kal. Vam’kir are sort of like vampires, and Ba’Kal are shifters. Both races mate and have similar leadership structures. Each race has a leader, sort of like the Volturi in Twilight, who rule all the alphas leading the many communities. But wait, there’s a twist because this brilliant world couldn’t be so simple. Every hundred years, Mother Earth, the creator, gives rise to one special blend of the two races who has the potential to bring both together, or destroy one forever. Whew! I think I summarized the world without giving away any spoilers.

This book was an amazing read, one I couldn’t put down, although I had to because I would have otherwise been incredibly antisocial. The immediacy of the action was palpable throughout the story. Each scene dripped with emotion and visceral description. It was as if Ms. McCoy wasn’t present at all, not even as an author. The characters lived on the page, and I could feel and experience their emotions as if I were there.

The world-building was phenomenal. Simple, yet elegant. Similar to our own world, I could imagine living alongside these races, not even knowing they were any different than me. But the rules governing each and the history of their conflict was seamless, enough detail woven in to keep us firmly rooted in the challenges these characters faced.

The sex was jalapeño-hot, but also emotional, just the way I like it. The need and desire radiated off the two main characters, although both showed remarkable restraint for fear of hurting the other. In particular, Manning, the head shifter reigning over all the other alphas, remained sensitive and compassionate, the ferocity of his need balanced by his driving desire to allow Quinn to move at his own pace.

And then there was the storyline. This was more than a love story between two characters. It was a story about the forces that can divide people and, ultimately, bring them back together. Love was the force in this story, bringing with it a healing and happiness.

You can buy Crimson Mate here:

One thought on “Nikki McCoy Scores A Hit With “Crimson Mate””