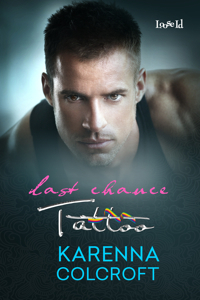 Blurb: After “failing” to make a life and a drag career in Boston, Rad Morris has returned home to Ludington, Michigan, where his primary goal is to avoid his disapproving family. Only his grandmother accepts him, and Rad feels guilty for taking her support and money.

Tattoo artist Dorsey Bellamy moved to Ludington three years ago after the death of his lover in a gay-bashing gone too far. Until Dorsey meets Rad, he keeps to himself, but something about Rad catches Dorsey’s attention. They form a friendship, which soon turns sexual, and then emotions enter the picture. But after confrontations with family members, Rad wants to leave town again, and Dorsey can only try to persuade him to stay.

Review: I was intrigued by Last Chance Tattoo as soon as I read the blurb. I have truly enjoyed some previous books by this author, so I just had to read this one. After reading it, I must say I fell in love with the book.

Rad Morris has not had an easy life after coming out to his family. Most members of them turned him out and wrote him off. The only family member who even speaks to him is his grandmother. I have to say his grandmother was a wonderful addition to the story. I loved her unwavering support of Rad, even in the face of constant bullying from the rest of the family to put him out.

When Rad realizes that his dreams aren’t going to come true in Boston, he heads back to Michigan to stay with his grandmother until he is back on his feet. This causes some CRAZY upheaval with the rest of the family when they find out. Rad hates putting his grandmother in the proverbial line of fire, but she insists that he is welcome as long as he needs to stay.

Rad is not a man who is going to take a handout for long, however, and he decides he needs to find a job. While out looking for work, he ducks into an open shop to avoid one of his not-so-nice family members, and he meets Dorsey Bellamy. Dorsey works in the only tattoo shop in town, and he is everything Rad didn’t even know he wanted in a man.

Both men are very attracted to one another and after dancing around each other for a while, they end up connecting and boy is it hawt!

Normally this would be a cause for happiness, but with Dorsey still grieving a dead lover and Rad avoiding everything about his family, there doesn’t seem to be any route that leads to a HEA.

When Rad’s family surprises him with an intervention style meeting, he finally decides to stand up for himself, and I couldn’t have been more proud of him. This confrontation leads to he and Dorsey working out a way for Rad to stay in town, and puts them on track for their HEA.

This was a wonderful story and I just adored both MCs. They were both slightly cracked but not broken, and they helped each other repair themselves. I loved how Rad grew a backbone right before my eyes, and Dorsey began to deal with issues he had left unaddressed for three long years. These two men fed off each other for strength and understanding, and they fell in love with each other along the way.

I would highly recommend this book. It was a shorter book than I normally like, but I feel all the bases were covered and the characters well very well rounded.