“He says you kill ghosts for a living. Like you’re a ghostbuster or something.”

“I’m not a ghostbuster.” ― Kendare Blake 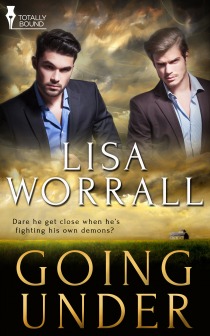 Evan Griffin moved into his remote country house with all the excitement and promise of a new start. He thought he’d found it until the strange noises began… When the attacks become physical, he was left bruised and battered and desperate for help.

When Evan walks into the offices of paranormal investigators, Knight & Stone, Ross Stone is dumbfounded by the injuries the man bears. Injuries Evan insists were caused by an unseen assailant in his own home. Something in the man’s eyes tugs at Ross’s heartstrings. Does he dare risk getting close to Evan when he is fighting his own demons?

Reader Advisory: This books contains scenes of violence and references to past abuse.

Review: I very rarely read a book twice. I hate knowing what is going to happen ahead of time. If I figure it out, then that’s okay because it’s what will possibly happen, but if I’ve read it before, then I know what will happen and that drives me nuts. Well, lately a lot of the rights to titles previously published by the house that shall not be named are reverting back to the authors. The authors are then re-editing, updating and re-publishing those titles. I don’t know if it’s my age or the drugs I did in the 80s, but I often forget whether I’ve read a book before or not. When I saw a new Lisa Worrall (a must buy author for me) on the submissions sheet, I jumped before checking to see if it had been published before. It had. I read it almost exactly two years ago. Thankfully, the drugs or age or some combination of the two kept me from remembering most of the book, and I was able to thoroughly enjoy it this time too.

Poor Evan Griffin has been accident-prone since childhood. He has no idea why and his parents offer no insight. When his lover drowns, he moves out to the country to lick his emotional wounds and be alone for a while. Turns out that while he technically lives alone, he’s not really alone. He figures out pretty quickly that he is being physically abused by a malevolent paranormal something which resides in his house. But not just this house. This presence has been attached to him for years, following him as he frequently moved

He is finally forced to consult with paranormal investigators Knight & Stone. They are not ghostbusters! Ross Stone is dumbfounded by the injuries he sees on Evan’s body, injuries Evan insists were caused by an unseen assailant in his own home. When Ross is looking over the bruises and touching Evan, they both feel that sparking connection…

Ross is fighting a demon of his own, though. His abusive ex-boyfriend just got out of prison, where he served time for beating Ross so badly he wound up in a coma. He contacts Ross the day after he is released and makes it perfectly clear to Ross that he belongs to him and nothing about that has changed.

Ross, his business partner Jack, and Jack’s lover Hal pack up their paranormal cameras and temperature gauges and electro-magnetic pulse thingies, and they all go to Evan’s house to set up for a night to see what happens. What happens is madness and mayhem.

There is great sex, several attempted murders of humans by ghost, lots of grievous bodily injury and a whole lot of heated glances and lustful stares.

Evans parents came for a visit and I wanted to punch them in the face. I am a mom. Many of you are parents. They knew what the problem was but hadn’t wanted to tell Evan because they thought he was better off not knowing. Once they finally come clean, and additional help is brought in, all was made right with the paranormal/human battle taking place in Evan’s house.

All that remained to be resolved is whether Evan and Ross want to be together, bruises and injuries and all. Ross is funny as hell. Lisa Worrall has a great sense of humor, and she let it fly when she wrote Ross. His interaction with Jack and Hal, as well as with Evan, was comic relief at its finest. She shifted from screaming murderous ghost to smart-ass dialogue to smoking hot sex on a dime. That’s one of my favorite things about her writing.

Even if you read this when it was released a couple of years ago, it’s worth Going Under again. And if you didn’t read it before, definitely read it now!

You can buy Going Under here: