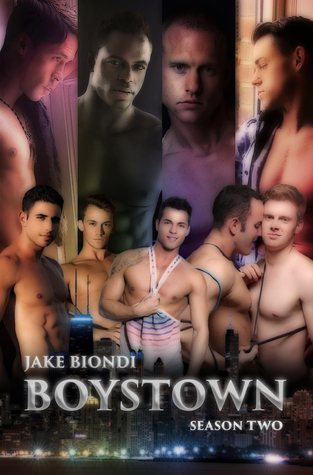 Blurb: In the aftermath of the warehouse shootings, lives are forever changed and relationships are forever altered. As the families of the victims work to put the horrific event behind them, they find themselves at the center of an even larger plan for revenge.

Ciancio twins Marco and Gino are as handsome as they are powerful — and they arrive in Boystown with a scheme rooted in the bad history between the Ciancio and Mancini families.

At the same time, Keith Colgan seems hell-bent on getting back the boyfriend he believes was stolen from him, Ben Donovan continues with his plan for Jacqueline Morgan and her son Jesse, and a stranger from the past threatens the future.

It all leads up to a spectacular New Year’s Eve engagement party that no one will ever forget.

Welcome back to BOYSTOWN!

Review: Hold the phone. Did someone just come back from the dead? Ah, yet another soap opera cliffhanger and question left unanswered in Jake Biondi’s Boystown: Season Two.

There’s a bit of a second-verse-same-as-the-first feel to this installment of the series, in that much of the same relationship drama is carried over from Season One, with only minimal resolution to those storylines in Season Two, which can only mean that Season Three will either start wrapping things up or will fall into an unfortunate cycle of repetition. There’s yet more chaos heaped upon the steaming pile of drama in the lives of these characters—it’s like an episode of Flipping Houses, except in this case it’s flipping spouses. Those three little words, I love you, don’t seem to mean much to these people as they flit from one sexual encounter to the next, only to pull out the Love Card again, with an urgency not witnessed since Brit-Brit’s fifty-some hour marriage to a guy who’s name no one remembers anymore.

The author’s method of delivery hasn’t altered from the first book to this. Whether that’s good or bad is a matter of personal preference, but I have to say that everything that poked at my grumble buttons in the first book seemed amplified in Season Two (e.g., it’s not necessary by now to continually call established characters by their first and last names). There’s also still a profusion of routine Tab A/Slot B style sex in this installment, both M/M and M/F, which doesn’t leave much room for plot or character development, something I felt was lacking in Book One.

But, before it seems as if there was nothing at all redeeming about this episode in the series, let me correct that in a hurry. There are several characters among those who haven’t been offered much beyond a one dimensional treatment that I’m entirely invested in—namely Derek Mancini and Cole O’Brien, whose story has been delivered to the boiling point in their “what the hell just happened?!” moment. I can’t tell you what happened, duh, that would be a major spoiler, but while we all knew what was coming for these two men, when the fateful moment finally arrived, the hook was baited and I swallowed it gleefully. There were also some new characters introduced in Season Two who should play a significant role in the upcoming season, namely Gino Ciancio, whom I liked almost immediately, and his involvement with Justin Mancini, Derek’s brother. They bring a Romeo and Juliet (Romeo and Julian?) element to the storyline. Rather than the Montagues and Capulets, we have the Mancinis and Ciancios, embittered enemies who may just find themselves bound by a forbidden love. That, however, remains to be seen.

Once again ending in an explosive (literally!) cliffhanger that’s drawn me right back into the fray, I can say that in spite of some reservations and niggly bits, I’ll be there for Season Three with the hope that we’ll get more substance and less surface to these characters and their many plights.