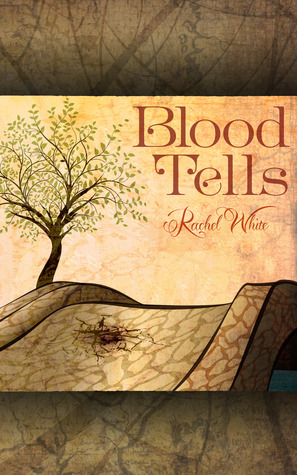 Blurb: Nineteen years ago, Demetrius Fallon was accused of murdering his father by way of a rare, unusual poison. When the crown prince is nearly killed the same way, Demetrius agrees to work with Rodger Dalme, the handsome, friendly captain assigned to the case, in order to find the culprit and prove his innocence once and for all.

But there is treachery in every corner, and if he hopes to untangle the lies of the present, Demetrius will first have to face the shadows of his past …

Review: The best thing about Blood Tells by Rachel White is the plot. Yes, it’s a romance to an extent, but the romance really comes second because what matter the most are two things: Demetrius’ past, which casts a very long and painful shadow in the present, and the political trouble brewing in court. What I love about the plot is the fact that it’s not an easy one to read. Tragedy plays a massive role in the book, with key players’ pasts woven with the same threads of death and heavy loss. How each of these characters copes with and goes about his or her current life make up a great deal of the emotional elements of the book.

It’s also not an easy book to read because people do die, with some reasons more terrible than others, and a number of possibilities that would’ve made a great difference in the future are, sadly, taken away. These elements I’ve pointed out give the secondary characters – especially those secondary characters – a very multilayered treatment, and I ended the book feeling so much sympathy for them. Even the culprit behind Prince Serys’ poisoning, I might add.

The heavy focus on characterization does compromise setting and world-building. Demetrius’ environment is painted with rather broad and vague brushstrokes, which hampered my immersion in the story a little. There are details that tore me out of the book because they sounded quite modern (i.e., the use of “cigarettes”) that I wasn’t sure if the setting was an alternate universe type of deal as opposed to a full-on fantasy world. That said, it’s not so bad as to confuse a reader too much, and since the characters take center stage, after a while the setting pretty much vanishes in the background. The end result, when I read the book, was that the characters seemed to move within a world that felt somewhat detached from their lives since I didn’t feel much grounding in it. There’s a bridge, for instance, where a very fateful event had taken place in the past, but it’s barely described, its surroundings and the heavy emotional connections to it not very clearly drawn. We’re simply told about its meaning and not really shown.

The biggest problem I have with this book is Demetrius himself. It’s a difficult issue to grapple with since the plot depends on his point of view and on his back story. Unfortunately I didn’t find him sympathetic at all despite the burden he carries with him for nineteen years, and especially the emotional crippling he suffers because of it. At first it was difficult putting a finger on why I couldn’t connect with him or even sympathize as an onlooker. It took me maybe close to 70% of the book to realize it was his odd emotional detachment to different characters – even to Rodger – that hampered my liking of his character. Not only that, he has a tendency to wallow. His emotional crippling, as I call it, seems to encompass everything, and it’s like being inside the head of a shadow the whole time I read the book. His moods don’t vary; if they did, I sure missed them, because it was just nothing more than one glum moment after another that I could latch on to. Even the sex scenes felt rather detached or muted in feeling.

The secondary characters, as I’ve noted, were a lot more interesting and memorable to me. Nikolai Korov, for instance, is a brilliantly written character, and I wished he were the hero of the book. Demetrius himself even acknowledged the way Nikolai had re-invented himself, in a manner of speaking, as a result of his awful past. A past that, compared to Demetrius’, is a hundred times more tragic and is more likely to leave scars. Even worse – it’s a dark past that can still affect Nikolai’s future, now that he’s got children. And yet Demetrius couldn’t find it in himself to adjust and to adapt, when Nikolai has a lot more to lose compared to him. While Demetrius chooses to leave his past behind, after all has been said and done, there’s still no indication anywhere that he’ll be changing in a new environment. There’s a possibility, sure, but his decision is predictable, given the way he’s behaved throughout the book, and while understandable, I’m still given not much reason to feel for him or at least to hope.

Will Rodger change him down the line? I really can’t say. I’d like to think so, but it seems as if the burden still lies on Rodger and not Demetrius insofar as the romance is concerned.

Character niggling aside, Blood Tells gives us a lot to chew on with its plot. Its resolution is hopeful, but it does come at a price, and it’s a price that’s realistic and logical, given what’s laid out for us from the start. I appreciate the fact that White doesn’t hold back on the cause-and-effect, that losses happen for reasons that run the gamut from ridiculous to horrifying. In a manner of speaking, they’re almost Shakespearean in scope and quality. If the book falters in giving us a main character with whom we can find an emotional connection, it still blesses us with a plot and side characters that are richly layered and smartly written.

You can buy Blood Tells here: