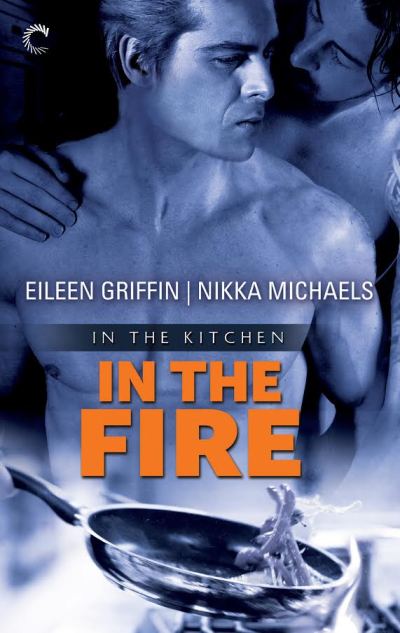 Title: In the Fire

Series: In the Kitchen

BLURB: Because the way to a man’s heart…

Eight years ago, the world was their oyster. Until, that is, competing chefs Ethan Martin and James Lassiter’s hot and heavy relationship fizzled after Jamie left for an internship in Paris. Even though Jamie’s career has taken off since his return to the States, with his own television show and a lot of fame, his feelings for Ethan have never quite gone away.

Ethan’s culinary career has developed more slowly, but he’s almost saved enough to buy the restaurant where he works and re-open it as his dream spot, Bistro 30. If only he could get the sexy chef who loved him and left him out of his mind.

But when someone starts sabotaging the restaurant and a fire threatens to take away everything Ethan holds dear, his only option is to rely on Jamie for help. Back in close quarters, the two men will have to find a way to work through their past if they hope to save the restaurant—and their future.

See how Ethan and Jamie’s romance began in In the Raw, available for Pre-order now!

EXCERPT: When we made it to the sofa I nudged him to sit. Instead, he turned to face me. Even intoxicated, the way Ethan looked at me now, heavy lidded eyes tinged with heat, was the way I’d remembered him. No anger, no accusations, no bitterness, just a hint of my Ethan. But he wasn’t my Ethan anymore, was he?

When he slid his hands up my arms to cup my face I should have moved. I should have told him no. But I didn’t. Instead my heart warred with my mind over what was right and what I had dreamed of since we said our last goodbyes all those years ago. This was the reason I couldn’t stay with anyone. No one but Ethan had ever made me feel alive like this.

I watched with shock as he leaned in close and brushed his lips over mine. A sigh escaped him as his fingers curled against my skin. Overwhelmed by how good he felt against me, I closed my eyes and breathed him in.

When I parted my lips, Ethan’s tongue brushed against mine and my resistance broke. My fingers tightened against the fabric of his borrowed T-shirt, pulling him closer as he deepened the kiss. I startled when a hint of metal brushed my tongue, knowing I’d discovered a new piercing.

Ethan’s low groan echoed mine and I turned my head, kissing him deeper. Passion warred with possessive need as he responded, both of us vying for dominance as we each tried to control the kiss. This was too much. With a pained sound, I pulled back, my breath uneven as I rested my forehead against his. As good as this felt, it was too much to digest after too much time had passed, coupled with alcohol and bad judgment.

“You need to sleep.”

He nodded and I stepped back and grabbed a blanket from the closet, nudging him to lie on the couch. I spread it over him and Ethan’s eyes finally closed as his body sank against the cushions. When I straightened up to shut off of the lamp next to the couch I froze at his barely audible words.

“I would have chosen you.”

EILEEN GRIFFIN BIO: Eileen Griffin lives in the southwest, but loves to travel and has spent many summers crossing Europe with nothing but a backpack on her back. She enjoys TexMex, lives for good wine, and has a certain penchant for purple unicorns. She loves reading all genres of books, but her current obsession is writing M/M romance. Her past published works include: Chasing Matt, a M/M novella co-authored with Nikka Michaels, Dinner For Two, a M/F romance novella, “Claiming Ayden”, a M/M shifter romance that is part of Evenight’s Alpha’s Claim Anthology: M/M Edition, and “Lost and Found”, a short story written for the M/M Romance Group’s Don’t Read in the Closet: Love’s Landscapes Event. Eileen is currently working on a new M/M series set in a Bed and Breakfast with Nikka Michaels, as well as several other projects both individual and co-authored.

NIKKA MICHAELS BIO: Nikka Michaels lives in the rainy Pacific Northwest where she spends her time cooking, laughing and crafting romantic tales to satisfy her craving for HEAs with heat. A voracious reader, novice knitter and music lover she’s been known to multitask without breaking a sweat. She loves to read and write M/M romance but believes everyone deserves a love story. She currently has several releases out including, Chasing Matt, a M/M novella co-authored with Eileen Griffin, Christmas with Caden, a M/F romance novella from Cobblestone Press, “Waking up Wolf”, a M/M shifter romance in Evernight Publishing’s Alpha’s Claim: Manlove Edition anthology, and the MM series which includes, Mile High Service, Room Service and Lip Servicefrom Cobblestone Press’ Blue line. She also has a short story, “His Assistant” in Evernight Publishing’s best selling Executive Assistant: Manlove Edition anthology.

5 thoughts on “Exclusive Cover Reveal and Excerpt: “In the Fire” by Eileen Griffin and Nikka Michaels”