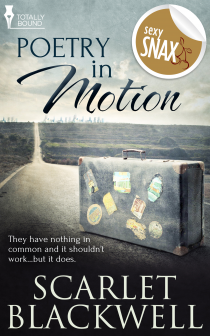 Blurb: Traveling salesman Paul is only in the historic English town of Lincoln for one night and is looking to pick up a spicy little something to take back to his hotel. Should twenty-year old student Adam be off limits? He’s too young and Paul should know better. But Adam’s too keen and Paul has limited will power…

Review: I’m not sure about revised editions, but since I loved the original Poetry in Motion, I decided to see what changes were made with this updated version.

Paul comes off as a bit jaded with life. After all, he’s never really experienced that elusive emotion called love, so when he’s hit on by a young student, Adam, Paul ends up snubbing him for being too young. Later, after being teased by his fellow traveler, Duncan, for passing up a quickie, Paul changes his mind. It’s been awhile since he last had sex with something other than his own hand, after all. Upon learning that it’s Adam’s first time, however, Paul turns out to be a gentle lover, but still he keeps his distance, not wanting to further a relationship with the young man. In fact, Paul is a bit of a jerk, reminding Adam that it was nothing more than a one night stand. They each goes their own way, but something happens with Paul. He can’t seem to get Adam out of his thoughts. At one point, it dawns on him that he he’s let “the one” get away. And then the fun begins, when Paul tries to undo all the hurt feelings he caused Adam. Commence the wooing.

I love these kinds of romances, where tough guys fall hard and even though there were some changes from the original, it didn’t take away my aaaaah moments.

It’s still a 4 Star rating. My only problem with Poetry in Motion was that it was too short. I’d have loved a more in depth story of these two MC’s.

You can buy Poetry in Motion here: