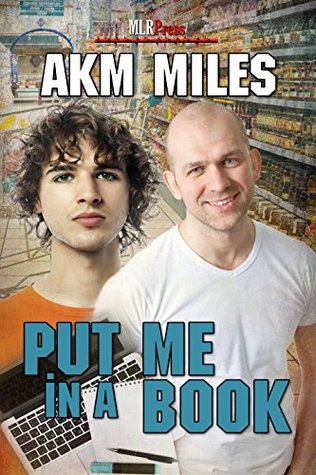 Title: Put Me in a Book

Blurb: Brandon Reese thinks there are too many big reasons why he and Rhine Walken can’t have anything other than a friendship, but Rhine thinks differently.

Brandon Reese isn’t ugly, but he thinks he is. He knows he looks better now that he’s lost over 200 pounds, but he can’t get over feeling, well, less like the handsome men he writes about in his gay romances. Then he meets Rhine Walken. He’s intrigued. But the next time he sees Rhine there’s something really wrong with the young man. Like really. Brandon finds out that Rhine suffers from a traumatic brain injury that manifests in a strange manner, one that makes a relationship pretty much off the table. Damn that sucks. Because he could love this man.

Review: AKM Miles’ Put Me in a Book is a Beauty and the Beast fairy tale for the modern age, although the beast in this tale may not be quite as ghastly in appearance as he believes himself to be. Brandon Reese is not the typical romantic hero portrayed in this genre—pretty and perfect in practically every way. No, Brandon is real, with real doubts about his looks, especially where one beautiful man in particular is concerned.

Post bariatric surgery, Brandon is still, in many ways, an insecure, morbidly obese recluse despite the fact that he’s lost two-hundred pounds and is committed to maintaining a healthier, more active lifestyle. As a successful gay romance author, he’s accustomed to his solitary life by now, but it all changes when Rhine Walken, a bagboy at Brandon’s local supermarket, captures his attention. Rhine, in fact, could very easily be the beautiful love interest in one of Brandon’s books.

But, appearances are deceiving where Rhine is concerned. He’s not just another pretty face in a dead end job. There’s a brilliant mind beneath his beautiful exterior, one that’s woefully underutilized in his current position, though there’s a very good reason for his working in a go-nowhere position: he suffered a traumatic brain injury in an automobile accident years before which has left him debilitated by unpredictable shifts in behavior, times during which his self-awareness recedes behind an almost childlike persona.

AKM Miles has brought these two men together, highlighting Brandon’s compassion and kindness while revealing that Rhine is much more than the bagboy Brandon first notices. The reader bears witness to their growing friendship, something they’d both love to be more than, but Brandon’s fears of Rhine’s reality shifts are a consistent obstacle to his willingness to explore something more. Until, that is, their growing feelings and connection to each other offer clues to both the cause and the possible solution to these fractures in Rhine’s reality.

I liked the premise of Put Me in a Book. It’s refreshing to see an author dare to write a novel outside the expected norms of the M/M genre, and I give Ms. Miles full marks for doing so, but where this book failed for me is in its execution. While I found both Brandon and Rhine to be sincere in their hopes and desires, their characterization never evolves much beyond them being two afflicted men, and the single dimension personalities partnered with the limited action and setting of the story didn’t work for me. To lean on the time-honored cliché, I simply felt no romantic chemistry between these two men, though I did find Rhine to be sympathetic.

Part of losing oneself in a great story is in suspending disbelief and grounding oneself in the tale the author is telling. Unfortunately, my ability to do so was compromised by the reality the author deliberately introduced to her plot. There’s some genre author name dropping early on in the novel, which I found somewhat jarring but, given Brandon’s profession, was understandable. Where this story went terribly wrong for me, however, was when several well known authors in the M/M genre showed up as active characters in the plot, complete with speaking parts. Put Me in a Book, indeed. While I believe this was intended to add a certain amount of relatability and charm to the story, I found the concept of one author putting words into another’s mouth quite off-putting and ultimately, the establishing of this much realism in the plot threw me out of the story and was something I was unable to overcome. The device, in the end, seemed little more than a means for the author to pay personal homage to some of her own favorite authors through her characters rather than it serving as a means of bringing Brandon and Rhine’s story to a satisfying close.

Sadly, I never found a solid foothold in Put Me in a Book beyond feeling empathy for Rhine’s condition. The story is sweet and sincere, to be sure, but I found it to be a bit overly twee for my taste, especially where the dialogue was concerned; that, in turns, ranging from stilted to prosy to florid. There’s little substance to offset this plot’s saccharine overtones, which doesn’t necessarily make it a bad book, just not the book for me.

While I can’t say I would give Put Me in a Book a heartfelt recommendation, I will say if you’re looking for a book that’s honest and relatively uncomplicated, this might be one to consider.

You can buy Put Me in a Book here: