“And there the craftsman sat in the deepening shadows of his workshop, ignoring the candles that burned themselves out till he was finally enveloped by the night, his thin figure bent over his worktable and the little minstrel.” — Hayden Thorne 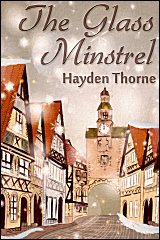 Blurb: It is the Christmas season in mid-19th century Bavaria. Two fathers, Abelard Bauer and Andreas Schiffer, are brought together through the tragic deaths of their sons. Bauer, a brilliant toymaker, fashions glass Christmas ornaments, and his latest creation is a minstrel with a secret molded into its features.

When Schiffer sees Bauer’s minstrel ornament in the toy shop, he realizes that Bauer is struggling to keep his son’s memory alive through his craft. At first he tries to fault him for this, but then recognizes that he, too, is seeking solace and healing by reading his son’s diary, a journal that reveals, in both painful as well as beautiful detail, the true nature of Heinrich’s relationship with Stefan.

Fifteen-year-old Jakob Diederich is the son of a poor widow. The boy is burdened with his own secret, and he develops an obsession with a traveling Englishman who stays at the inn where Jakob works. The lives of Bauer, Schiffer, and Diederich intersect during the holiday as Schiffer tries to focus on his family in the present, Bauer struggles to reconcile his past, and Jakob copes with an uncertain future.

Review: I first read Hayden Thorne’s The Glass Minstrel in its original publication four years ago, and one of the things I remember clearly about the book, when I’d finished reading it, was a sense of awe at how skillfully each of the individual storylines were woven together to make for a single, brilliant book.

There are three narratives running concurrently throughout The Glass Minstrel, each vibrant in detail that firmly affixes the story to its Christmas, 1850, time and place; each rich with emotion, all three deeply engrossing in their poetic prose and idyllic in picturesque beauty. This novel is part tragic romance, part healing and redemption story, and part a coming of age tale for a young man who is learning to come to terms with his sexuality through hope and dreams, rejection and disappointment, but, ultimately, with a promise of happiness discovered through a father’s chance to make amends with the past.

Stefan Bauer and Heinrich Schiffer’s presence is deeply engrained in this story as the couple around whom everything hinges. Falling in love with each other and making a single error in judgment which sends them both home from school in disgrace is the catalyst that brings their love story to its eventual, tragic ending. It’s through Heinrich’s journal that his father both curses and clings to his favored son’s memory as he wends his way through the details of how and when Heinrich fell so deeply in love with Stefan. Herr Schiffer’s anguish over his loss and his inability to cope with Heinrich’s unnatural proclivities is the wedge that comes between him, his wife, and his surviving children, who have each witnessed, through their own grief, their husband’s and father’s emotional separation from his family.

In contrast, Herr Bauer has suffered alone, having lost his wife years before he lost his beloved only son. Stefan ran away from the gossip and judgment of their small Bavarian village to start what was to be a new life with Heinrich, and it is through Herr Bauer’s palpable grief and regret that the reader learns of a father who’d loved his son unconditionally but never had the opportunity to ensure Stefan knew it. It is in the quaintness and warmth of Herr Bauer’s toy shop that we see a man who, in a single moment of anguish, has captured his son’s image in a glass ornament, a humble but beautiful minstrel that will eventually find a place alongside a simple shepherd to watch over him.

Jakob Diederich is the young man in whom Herr Bauer will discover atonement, as the boy who has suffered through the pangs of unrequited love comes to terms with the fact that he is different in a time when being so means rejection at best, danger at worst. Jakob’s story is both joy and heartache in the witnessing of first love’s heady bliss contrasted by the dawning realization that he may never know what it means to find true happiness with someone. Whispers of Stefan and Heinrich’s scandal eventually find their way to the very curious Jakob’s ears, and it is through these rumors that he and Herr Bauer will come to find hope and healing in each other.

Simply put, The Glass Minstrel is exquisite. It is a bard’s tale that not only succeeds as a coming-of-age novel but also exceeds its teenage demographic to grab hold of the heart of the adult reader who can empathize with the anguish of the parent for his lost child. Through more than a few tears on my part, this story reached out and captured not only my imagination but stirred my compassion and, in the end, uplifted my heart at Herr Schiffer and Herr Bauer’s healing, as well as in the hope Jakob will learn to believe in with Herr Bauer’s guidance. The magic of the winter landscape and the holiday season only serve to add to the sentimentality of this beautiful book, and I can’t recommend it highly enough.

You can buy The Glass Minstrel here: