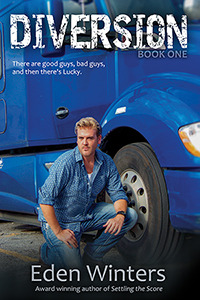 Blurb: There are good guys, bad guys, and then there’s Lucky.

Former drug trafficker Richmond “Lucky” Lucklighter flaunts his past like a badge of honor. He speaks his mind, doesn’t play nice, and flirts with disaster while working off his sentence with the Southeastern Narcotics Bureau. If he can keep out of trouble a while longer he’ll be a free man–after he trains his replacement.

Textbook-quoting, by the book Bo Schollenberger is everything Lucky isn’t. Lucky slurps coffee, Bo lives caffeine free. Lucky worships bacon, Bo eats tofu. Lucky trusts no one, Bo calls suspects by first name. Yet when the chips are down on their shared case of breaking up a drug diversion ring, they may have more in common than they believe.

Two men. Close quarters. Friction results in heat. But Lucky scoffs at partnerships, no matter how thrilling the roller-coaster. Bo has two months to break down Lucky’s defenses… and seconds are ticking by.

Review: Diversion, book one of Lucky and Bo’s story, I’ve followed this series from the start and have fallen in love with this couple. Lucky may not be the tallest man around, but what he lacks in height, he makes up for in fight. Tough as nails, he works as hard as he can to hide his enormous heart. Bo is the opposite. Large and hot, he has to fight his nature to care too much, to get too close. Both men work for the Southern Narcotics Bureau, landing there because both found themselves on the wrong side of the law…and both all too familiar with the nasty underbelly of the drug world.

Both men are thrown undercover to expose Dr. Beverly Ryerson, who traffics drugs through her pharmacy. Bo, a former pharmacist, takes a job to gain inside information. His prior drug addiction proves to be a challenge, but not nearly as big a challenge as distancing himself from connecting with the people he works for.

Lucky, having no such trouble, finds himself fighting a far different battle. While he can distance himself from any job, keeping his feelings for Bo under control proves to be a task even he can’t manage. After all, what landed him at the SNB in the first place was a connection to a previous lover and drug lord, and he still lives with the scars from that relationship.

There were so many things I loved about this book. First, the deep knowledge Ms. Winters brings to the subject matter. Not only are we embedded in the subtle and dangerous world of narcotics, but we also see how the agencies fighting against drug trafficking operate. She brings her knowledge and research to life in believable ways, enmeshing the reader so we feel like we’re learning how this part of society works…kind of like watching CSI, Criminal Minds or any of the other cops and robbers type shows out there. Each scene flows seamlessly into the next, the relationship between our two protagonists woven into a fast-paced, nail-biting race against a rapidly ticking clock.

The relationship between Lucky and Bo progressed beautifully, each character’s initial personality well-established and their inner shifts and changes emerging in a natural and heart-wrenching journey towards growth and understanding. Lucky’s hard exterior slowly chips away as Bo slips past barriers as if they don’t exist. Bo, so strong and confident in his ability to connect with Lucky, struggles against his own inner demons, his undercover work placing him face-to-face with the pills that ruined his life in the first place.

The sex between the two is gratifying and hot. Unlike some stories where one character is aggressive and the other more submissive, both Lucky and Bo are all-man. This is a love story between two alphas who complement each other in heated and substantial ways.

Having read the second and third books, I can tell you that Diversion leaves off with a rewarding ending, but also leads into the next book in the series, Collusion, and then the third, Corruption. And, I’m pleased to announce the fourth is nearing release. Manipulation will be the 4th installment of this amazing series of love and action.