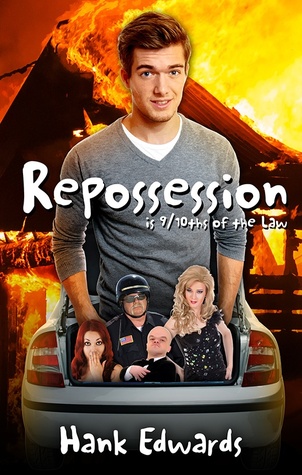 Title: Repossession Is 9/10ths of the Law

Blurb: Alan Baxter barely scrapes by working as a deejay in suburban Detroit. To make ends meet, he takes a job as an automobile repossession agent, and discovers his very first assignment is a car owned by his drug dealer ex-boyfriend. On top of that, a body is discovered in the trunk…by a cop. Soon Alan’s life is completely upturned as he is pulled into a mystery involving more bodies, a highly lethal new street drug, a mysterious man with a top hat and cane, raging dwarves, a house fire, a cranky police detective, and his even crankier cat!

Review: What can I say about Repossession is 9/10ths of the Law? I love finding little gems like this. Not only is it a mystery, but it’s a comedic one at that, a fun romp with an “anything that could go wrong did plot”, because when it came to repossessing cars, Alan Baxter made Murphy’s Law look like it was written just for him.

I didn’t think it’d be possible for each repossession to be funnier than the one before, but the final one had me in stitches! Every time Alan’s friend Gus said he had an easy repo for him, I probably had the same wary look on my face that Alan managed to have, and when the bodies started piling up, poor Alan always seemed to be in the wrong place at the wrong time.

Personally, I’d have loved to have read Repossession is 9/10ths of the Law without the blurb info, so I won’t be revealing anything more about it because I don’t want to spoil it for you. I’ll just say there are no lulls in the storyline; something always seemed to be happening throughout Repossession is 9/10ths of the Law, and I’ll also give a mention to the secondary characters, who were all memorable, especially Mrs. Colonoscopy and her squirrels.

This is a first time Hank Edwards read for me, and it won’t be the last. I was excited to see that I have a couple of his works on my bookshelf which I intend to delve right into. I’m giving this one a high 5 Star rating. Highly recommended if you have a craving for a comical, “no smex” mystery.

Mr. Edwards, if you ever decide to turn Repossession is 9/10ths of the Law into an audiobook, I have some strong recommendations on who could do justice to the narration.

You can buy Repossession is 9/10ths of the Law here:

One thought on “Review: “Repossession is 9/10ths of the Law” by Hank Edwards”