Most of my stories feature animals somewhere. My characters tend to have pets, and often these creatures play an important part in the development of the plot.

In The Dark Side we meet Barney, Nathan Darke’s huge dog who lumbers around chasing rabbits across the Bronte moors. He is a benign, friendly sort, a likeable beast but he comes into his own in Sure Mastery where he saves Ashley’s life. Twice. Sure Mastery also introduces us to a couple of sheepdogs, and Ashley’s sweet little cat, Sadie. The four legged star of The Hardest Word is a horse.

Summer Jones in Rich Tapestry doesn’t have any pets, but still animals feature in her story. Her first meeting with Dan is brought about by an injured badger. Dan is a vet so of course animals are important to him. He has a particular fondness for lemurs. And racehorses.

I think this tendency to always write animals into my stories is due in part to my own love of pets. As a child I became used to having at least one dog around the house, and as soon as I got my first home of my own I was desperate to buy a puppy. Sheba was a Labrador/German Shepherd cross and lived to be about sixteen.

We also had a Yorkshire terrier called Toby. Toby came to stay for a couple of weeks one June when his owner was going through some domestic upheaval. He died of old age about twelve years later. I suppose I should have smelled a rat when his previous owner sent his winter coat as well as his favourite squeaky ball.

We’ve had lots of cats over the years too, not to mention rabbits, hamsters and a succession of goldfish that my daughter always seems to win at fairs. The pet who was with me the longest was a tortoise called Tilly, who moved house with me several times and used to hibernate in the compost heap.

These days our menagerie stands at two dogs, two tortoises, two rabbits, a cockatiel, and a tank of tropical fish. Our dogs are Westies, called Ethel and Saffy. They like to keep me company while I write, which sort of works.

When I first created Dan’s character (as Nathan’s brother he is mentioned in The Dark Side) I had no intention of developing a story around him. Even less so Summer, who makes a brief appearance at the start of Sure Mastery. Oddly though there they were, waiting, their story crying out to be told.

By some fortunate twist of fate I had originally created Dan as a vet based in Cumbria where Summer grew up, so the stage was set for them to meet. Although their first encounter is purely by chance, Dan and Summer both appear in The Hardest Word, though they never actually meet there. But their lives are moving closer together, it’s only a matter of time. In A Richness of Swallows several threads from the previous three ‘Black Combe’ trilogies are drawn together and I think this final (for now) series rounds off the set well.

Unless of course any more creatures occur to me whose owners have stories that need telling. 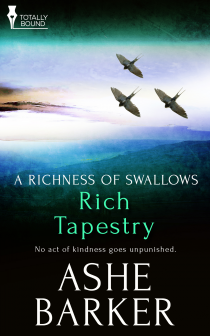 No act of kindness goes unpunished.

But will one night with accomplished Dom, Daniel Riche, fulfil her dreams, or will it just prove to her what she always suspected, that anything so intense is best avoided?

Scared, confused, and utterly horrified at her response to Daniel’s touch and his dark brand of pleasure, Summer still finds herself yearning for more. Why, despite her pleas and his obvious appreciation of her body, is he peculiarly reluctant to deliver all she demands from him?

Hurt and confused, Summer is desperate to escape. But can she leave her memories of Daniel behind? Does she really want to?

Like the sound of Rich Tapestry? You can buy it HERE

Author Bio for Ashe Barker: Until 2010, Ashe was a director of a regeneration company before deciding there had to be more to life and leaving to pursue a lifetime goal of self-employment.

She draws on settings and anecdotes from her previous and current experience to lend colour, detail and realism to her plots and characters, but her stories of love, challenge, resilience and compassion are the conjurings of her own imagination. She loves to craft strong, enigmatic men and bright, sassy women to give them a hard time—in every sense of the word.

When she’s not writing, Ashe’s time is divided between her role as resident taxi driver for her teenage daughter, and caring for a menagerie of dogs, cats, rabbits, tortoises and a hamster.