“Too often something was lurking around the corner ready to bite you in the ass. Literally.” – Meredith Russell 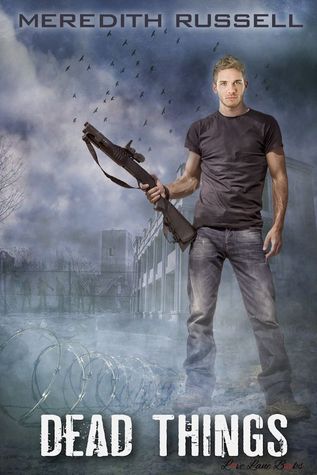 Blurb: Devin never thought he could find hope or love among the ruins of a broken world. Not until he found Noah.

When Devin Reid returned home from his final tour in Afghanistan he thought he’d seen the worst of what people could do to other people. It turned out he was wrong.

The life Devin knew is gone. A deadly virus has infected the world’s population, leaving in its wake two types of people—survivors and monsters. Devin is a survivor, a man almost as broken as the world he struggles to survive in. Devin is part of a group who have found refuge in a high security penitentiary in Kansas State. Resources for the group are limited, but outside the safety of the prison walls, the newly-made undead monsters are hungry and hunting. It’s down to a handful of people like Devin to risk their lives scavenging the cities and highways to meet the demands on food and supplies.

On one fateful venture, Devin finds someone with the potential to change a dark future, destined for blood and heartbreak, into one of hope and second chances. He finds Noah Weber.

Together, Devin and Noah work to keep the monsters at bay, but do they have the strength to overcome the hurt and loss they’ve both suffered in the fight for survival? And find love in this harsh, unloving world?

Review: I will always give Stephen King credit for contributing to my need to devour books. I cut my reading chops on horror in junior high school, and it wasn’t until more than a decade later that I decided to give the romance genre a try. You know the books—the ones with the handsome rogue with the dreamy eyes and granite jawline, and the swooning damsel with the pillowy bosoms overflowing her gown on their covers? Alas, if only there were a way to combine horror and romance into a single book…

Well, ask and ye shall receive. Meredith Russell has done just that in her post-viral apocalypse zombie novel Dead Things, set in a world where a contagion gone mad has created a societal collapse, where it’s kill or be killed. But only for as long as it takes to resurrect as one of the walking dead.

From page one, Ms. Russell does a fantastic job of setting the tone and pace of the novel. Her descriptions are palpable, creating a mood of unease and a sense of overwhelming bleakness as it becomes clear humans are at a distinct disadvantage in a world that’s now overrun by monsters. Each trip beyond the relative safety of the prison walls in which a small band of survivors dwells is a risk, but is also integral to their survival. The danger and suspense, not to mention the gruesomeness of each zombie encounter, is filled with heart-pounding, adrenaline pumping moments, and I loved it.

Devin Reid is the man designated to make those trips to scavenge for food and medical supplies. Or, rather, it could be more that he volunteers for them because the loss he’s suffered outweighs his survival instinct. The death, and undeath, of the man he’d planned to spend the rest of his life with has made the idea of the future as bleak a landscape as the reality in which Devin now exists, and it was this desolation that made his finding Noah Weber all the more vital.

One of the things I feel worked so well in this novel is that the author avoided the temptation to make the relationship between Devin and Noah one that slipped into a purposeful contrast between their environment and a love that becomes the miraculous overshadowing of all their hardships. This is not a love conquers all romance, and I very much appreciated the pragmatism of it. Devin and Noah work to get where they are at the end, and even then, the author doesn’t give us a pat, sunshine and rainbows happily-ever-after, something I felt was the ideal fit for this type of story.

All of the elements—man vs. man (the human monster whose hunger for absolute power and control corrupts absolutely), man vs. himself (Devin and Noah attempting to adapt after so much pain and loss), and man vs. nature (or, the unnatural as is the case in Dead Things)—are all here in this single novel. I have to say, as far as the zombie apocalypse goes, I think Meredith Russell imagined us a pretty good one.

You can buy Dead Things here: